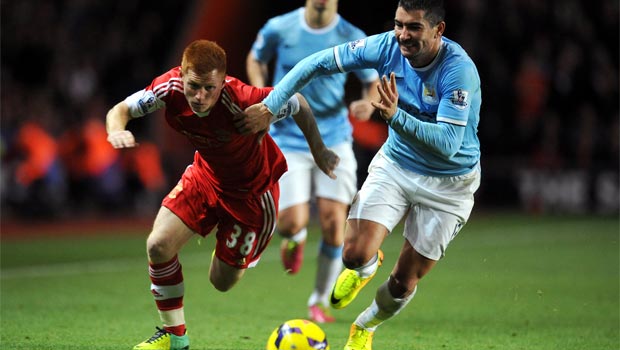 Manuel Pellegrini believes Manchester City’s hard-fought point at Southampton shows his side can play badly but still get positive results.

The Citizens have struggled on the road this season, losing at Cardiff, Aston Villa and Sunderland, leading to questions being asked about whether or not their array of stars have the mental strength to stand up to some of the more physical outfits in the Premier League.

City appeared to have shaken off some of their demons at West Brom on Wednesday, but conceded two late goals to escape with a 3-2 win at the Hawthorns.

The win in the Black Country had prompted many to tip them to cruise to a victory on the South Coast against the Saints, whose early season momentum has appeared to stall in recent weeks.

However, despite starting extremely strongly and taking the lead through Sergio Aguero, City were pegged back before the break thanks to a magnificent goal from Daniel Osvaldo.

Pellegrini isn’t too concerned though and, after so much heartache on the road so far this term, believes it is very much a case of a point gained rather than two lost.

“It is a good point. I don’t feel like we lost two points,” the boss said after the match. “In all the other games away I felt like we deserved more but here this was the result that both teams deserved.

“I always say that if you don’t play well and you can’t win, then at least don’t lose. We didn’t play well but we got a point.”

The point ended a three-match losing streak for Southampton, while City now find themselves in fourth in the table, four points behind leaders Arsenal, who play their game in hand on Sunday against Everton.