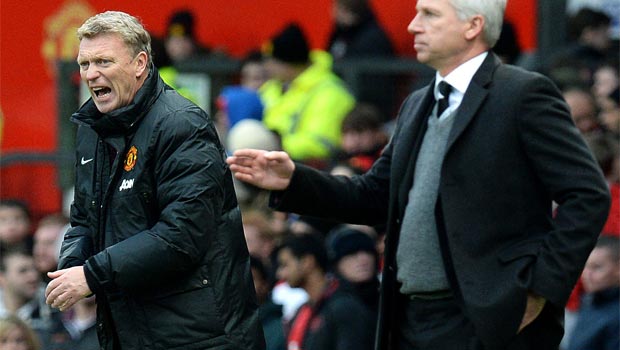 David Moyes has called for patience from the Manchester United fans following his side’s second successive home defeat against Newcastle.

The Red Devils went into the match on the back of a loss to Everton on Wednesday and once again looked extremely lacklustre on Saturday with Yohan Cabaye’s second-half strike proving the difference in a 1-0 win.

The result was Man United‘s fifth league defeat of the season and it appears as if their title defence is all but over with a top-four finish now looking like the best possible outcome to their season.

Moyes first year in charge at the club was always going to be a difficult one and there is no doubting that the champions are a team in transition, with the likes of Phil Jones, Danny Welbeck and Tom Cleverley still struggling to produce the consistency required to play for one of Europe’s top sides.

Despite the board insisting that they have no intention of sacking the former Everton coach, certain sections of the Old Trafford crowd have suggested bringing Sir Alex Ferguson back and although the 50-year-old admits he’s been frustrated by the results, he has called for calm amongst the supporters as his side continues to develop.

“I think the United supporters have been great to me and great to the club,” said Moyes. “They understand there is a big transition going on here and, like me, I don’t think they expected us to have lost five games at this stage of the season. We didn’t expect that.

“But I think they understand that there is a change going on. We’ll work, try to improve and try to get better.”

The Champions League places seem a long way off given the way that United are playing at the moment but they will be hoping to piece together a good run through December as they are set to face sides below them in the table.