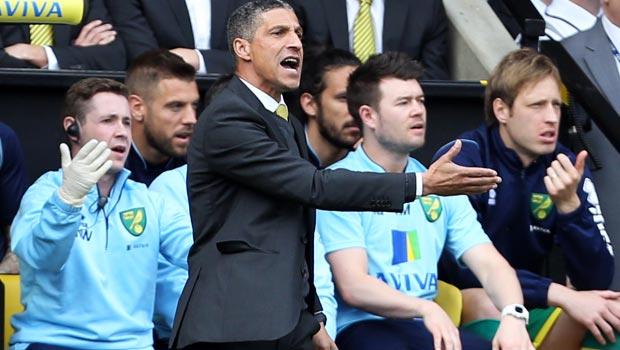 Norwich boss Chris Hughton admits next weekend’s relegation showdown with Fulham is his side’s “biggest game of the season” after Saturday’s defeat to West Brom.

The Baggies claimed a 1-0 win at Carrow Road on Saturday thanks to an early Morgan Amalfitano effort, a result which saw West Brom move ahead of the Canaries on goal difference.

Norwich now occupy the final safe spot in the Premier League table and are just five points clear of 18th-placed Fulham ahead of next weekend’s clash between the two struggling sides at Craven Cottage.

Hughton feels his side must now move on from their defeat to Albion and focus on Fulham, who claimed a vital 2-1 win at Aston Villa on Saturday.

“It’s become, at this moment, the biggest game of the season. We’ve put ourselves in that position because (the match with West Brom) was a big game for us,” said Hughton.

“The fact we were playing at home against a team around us in the division – (Saturday) was our biggest game.

Norwich face a daunting final run-in as they take on Liverpool (h), Manchester United (a), Chelsea (h) and Arsenal (a) in their remaining fixtures after the trip to Fulham, but Hughton is confident they can pick up enough points to avoid the drop.

“We have to realise that we have a tough away game at Fulham next week and we have four other games before the end of the season,” he added.

“I understand frustrations, it’s normal, but we have to make sure we’re all pulling in the right direction because it’s us as a group and everybody who’s going to get us the results we need.”

Norwich are 3.05 to come away from Craven Cottage with all three points next Saturday, with Fulham installed as 2.13 favourites to claim the win and the draw priced at 3.30.