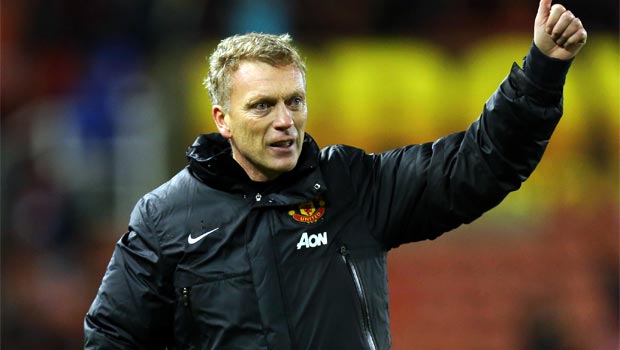 David Moyes is willing to give his current crop of strikers the chance to help Manchester United retain their Premier League crown after ruling out a January transfer window swoop for a new forward.

The Red Devils’ chief watched his side move up to seventh in the Premier League table and eight points behind leaders Liverpool thanks to a 3-1 win against West Ham on Saturday.

It followed on from a 3-0 away win at Aston Villa last weekend and a
2-0 Capital One Cup quarter-final success at Stoke in midweek as United seem to have rediscovered their goalscoring prowess.

But with star man Robin van Persie currently sidelined for the next month because of an injury, Moyes was again asked if there is any substance to rumours linking him with bids for unsettled Monaco striker Radamel Falcao and Atletico Madrid ace Diego Costa.

However, while the Scot is keen to bolster his ranks next month, he seems more than happy with the attacking options currently at his disposal in Van Persie, Wayne Rooney, Javier Hernandez, Welbeck and Shinji Kagawa.

“I would not say we are in desperate need of an out-and-out centre-forward,” said Moyes. “We have got Robin van Persie, Wayne Rooney, Chicharito (Hernandez), Danny Welbeck. Shinji can play in behind as well, we are covered.

“It is easy for people to throw names up, but when they look at it more closely you might say it wasn’t that good a suggestion.”