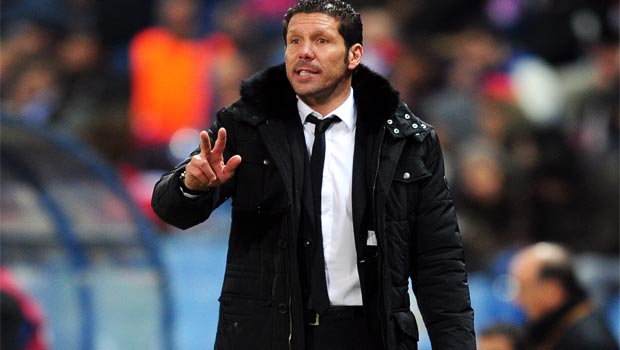 Diego Simeone is keeping his feet on the ground after Atletico Madrid side moved to the top of the Spanish Primera Division table on Saturday night, but he said he is ‘satisfied’ with their form.

The in-form Diego Costa was in the goals again with a brace after Diego Godin had equalised for Atletico Madrid following Andreas Ivanschitz’s shock second-minute opener, which had put Levante in front.

It moved Atletico three points clear at the top of La Liga, although they might have to settle for being in second spot over Christmas because Barcelona will go back to the summit on goal difference with a win away at Getafe on Sunday afternoon.

Despite that likely possibility, Simeone has been pleased with the way his side are performing, having won 15 of their opening 17 matches. However, the Argentinian tactician is also keen to keep himself and his squad of players grounded.

“We always imagine the best as always when you start any job, looking forward to the best,” Simeone said.

“We’re really satisfied with our job and all chances to grow up and improve. The guys have improved a lot in the last two years.

“This is not a situation. It’s a whole thing – about the fitness, tactics and committed to a clear target as a club.

“We won’t negotiate our idea, thinking match to match, step by step. In the difficulty we’re able to find solutions and that’s really healthy looking at our future.”

On Diego Costa’s performance, Simeone claimed he would have been a contender for the Ballon d’Or had the voting been left a little longer.
He added: “Great match for Diego Costa today. He converted the penalty with a great quality.

“It was a high responsibility.

“It’s clear that if the votes for the Ballon had been a bit later, he would have his chances.”