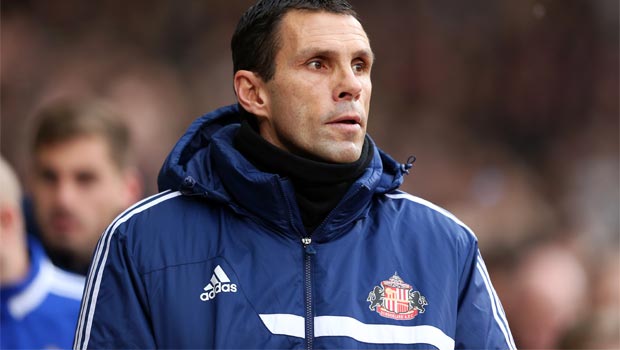 Gus Poyet has admitted that his Sunderland side are now ‘losing time’ and ‘losing games’ in their battle to escape from the Premier League relegation zone this season.

The Black Cats were held to a disappointing goalless draw against Norwich City at the Stadium of Light on Saturday, while they were also hit by the stoppage time red card handed out to Wes Brown, who will now miss the next three games as he serves a suspension.

The result also consigned Sunderland to being bottom of the table on Christmas Day, which has resulted in relegation in every season since the Premier League started in 1992-93 except in 2004-05 when West Brom pulled off ‘The Great Escape’.

Poyet’s men, who seem to have saved their best form for the Capital One Cup having secured a semi-final showdown against Manchester United following their extra-time win against Chelsea on Tuesday, have only 10 points from their opening 17 games, which leaves them four points adrift of safety.

And the Uruguayan tactician has accepted that it will be difficult for them to avoid a season in the Championship next term.

He said: “We are losing time, we are losing games. I said in the beginning after winning a couple, we needed to win 11 to think, ‘Can we get to 40 [points]?’, and we can’t win a football game, so who are you going to blame?

“This is where we are. The quality is what you see, there is no more.

“I was not expecting this. I have always said I hate excuses – until now for some reason, we have always had an excuse and people can use it.

“Today, we have not. Today was a day to win and we didn’t, so we are responsible for where we are and it’s getting more and more difficult.”