Red Bull: Sebastian Vettel on track for another title 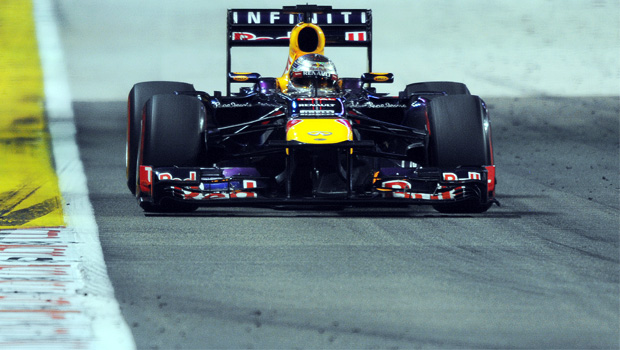 Sebastian Vettel roared home in Singapore to gain his seventh win of the F1 season and edge closer to a fourth successive title.

The German has been in imperious form in his Red Bull machine, and recent victories in Belgium and Italy have emphasised just how superior he is to everyone else at present.

Fastest in practise in Singapore, he lined up on pole, and was never in trouble from the start, coasting to victory over Ferrari’s Fernando Alonso to leave himself 60 points clear of the Spaniard.

Lotus’ Kimi Raikkonen scraped into the top three and is 98 points off the pace, while the Mercedes cars were once again found wanting, with Nico Rosberg fourth ahead of Lewis Hamilton who is 96 points behind Vettel.

Vettel’s dominance did not please all of the fans in Singapore, as boos were heard during the podium celebrations. The German just brushed it off though.

“It’s not nice but I think if you look around the grandstands, there are a lot of fans dressed in red as Ferrari have a strong tradition in the sport and have been more successful than any other team,” he said.

“But I have started to notice more and more people dressed in blue, so we are doing a good job of it on that front.

“They are quite emotional when they are not winning and they don’t like it as it costs a lot of money to follow the sport, in Monza or taking flights here to Singapore. As long as they keep on booing then we are doing a good job.”

Vettel praised the work put in by the whole Red Bull team.

“It was not easy to get everything right over the whole weekend but I am extremely happy though and the whole team can be extremely proud knowing how much work is going in,” he added.

“Here we have a funny rhythm, the mechanics stay up all night until the curfew kicks in, checking everything on the cars.

“There’s a lot of team effort going in so if we have results like we did today, where we have the luxury to control the race at some stage, it is because of those late hours and the commitment that goes in from everybody.”

Vettel gets the chance to extend his lead when the action moves on to Korea on October 6.