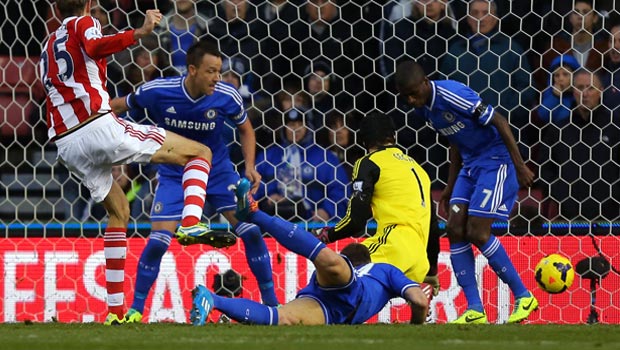 Jose Mourinho has revealed that he thinks his Chelsea side is in “trouble” following a shock 3-2 defeat at Stoke on Saturday.

The Blues have struggled at times since the iconic manager returned to Stamford Bridge in the summer, with the Portuguese boss often being blamed for his sometimes inconsistent selection policy.

One of the reasons for Chelsea’s success in the 50-year-old’s first spell was an apparent insistence on regularly playing his strongest side but the talent available to him this time around seems to have created a number of problems in the sense that he doesn’t appear to know his best XI.

The defeat at the Britannia Stadium was Chelsea’s third of the season and allowed Liverpool to move above them in the table into second, but despite their poor form, the West Londoners’ rivals have also struggled for consistency so far this season and the Blues remain in contention for the title.

What was perhaps most puzzling for Mourinho on Saturday was the amount of chances his side spurned in the first half, before falling foul to Oussama Assaidi’s brilliant stoppage-time winner.

This is not the first time the Blues have failed to kill off their opposition and it appears that for all their undoubted ability, the current Chelsea squad lack the killer instinct of their previous vintage.

Such traits usually prevent teams from winning silverware and Mourinho admits that Saturday’s defeat to the Potters has left him extremely worried about his team’s future.

“I don’t feel comfortable enough to tell you what I think about the game. We’re in trouble,” he told reporters. “After 30 minutes we should have been winning 3-0 or 4-0 but we weren’t. You have to kill the game, but we didn’t.”