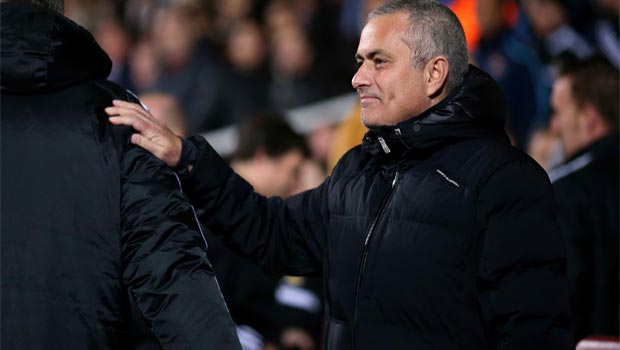 Jose Mourinho claims he isn’t worried about the five-point gap between Chelsea and Arsenal and is hopeful of making up ground on the title contenders this weekend.

The Blues suffered a shock defeat at the hands of Stoke last weekend, bringing to an end their run of three successive wins.

With Arsenal dropping points against Everton last week, the loss at the Britannia Stadium turned out to be a missed opportunity for Mourinho’s men to make up some ground on their London rivals.

However, the Portuguese coach is confident his team won’t make the same mistake twice as he looks to take advantage of the Gunners’ difficult assignment against Manchester City.

With Chelsea facing Crystal Palace on Saturday there is a chance the top of the table could become a lot closer by the end of the weekend.

Should Arsenal lose on Saturday and Chelsea win then the west Londoners will have the chance to leapfrog them to the top of the Premier League when the two clubs meet on December 23.

Despite the permutations of the next two weeks Mourinho says it is too early to predict which way the title race will go this season, but is confident things will turn in his team’s favour in the run up to Christmas.

“It is very early to predict the way things are going,” said Mourinho.

The former Real Madrid coach went on to say that it was too early to rule Manchester United out of the title race, despite the defending champions having slipped 13 points behind the Gunners.

“United have to recover points not just to a single team but other teams. But the culture of Manchester United is there, and the power and tradition is there. Never say Manchester United are out of the race unless it is mathematically possible,” he added.