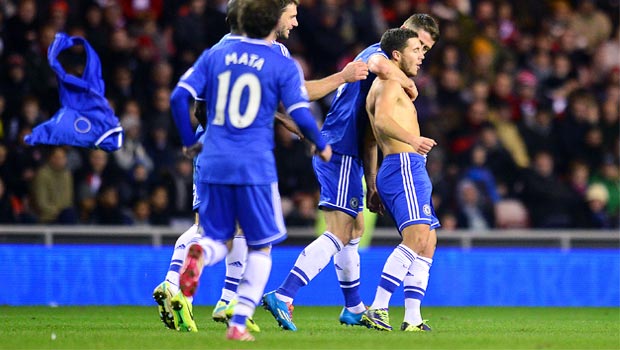 Jose Mourinho labelled winger Eden Hazard “special” after he put in a match-winning performance to help Chelsea pick up a dramatic 4-3 victory over Sunderland.

Despite the scoreline suggesting that the match may have been a tight affair, it was 22-year-old who was in control of the clash and he had a major influence on the result.

Hazard grabbed a brace and played a huge role in creating another as the Blues were able to remain within touching distance of league leaders Arsenal.

Sunderland opened the scoring through a Jozy Altidore strike, but Frank Lampard was on the spot to level with his head, before Hazard grabbed his first to ensure the west London club were ahead at the break.

The Black Cat’s John O’Shea brought his side back on to level terms before the former Lille man hit a powerful effort to restore the advantage.

Phil Bardsley’s own goal after 84 minutes nudged the travelling side 4-2 in front but he clawed back a bit of pride by netting a right end just two minutes later.

Mourinho believes that he has a special talent with the Belgium international and expects that he can only continue to improve and cause problems for opposition.

Mourinho said: “Hazard was special and gave from the first minute to the last minute. He had so much ambition to beat people, to create, to score, it was an amazing performance.”

The Portuguese also had kind words to say about Juan Mata and Willian, who played as a dangerous trio alongside Hazard in.

He continued: “I think Hazard, Willian and Mata gave a great dynamic to the team and played well.

“It’s very difficult to play quality football because teams are now very strong defensively. I think my team played fantastic football. Creative, beautiful, positive, all of the players playing dynamic and with creativity, I love the way they played.”