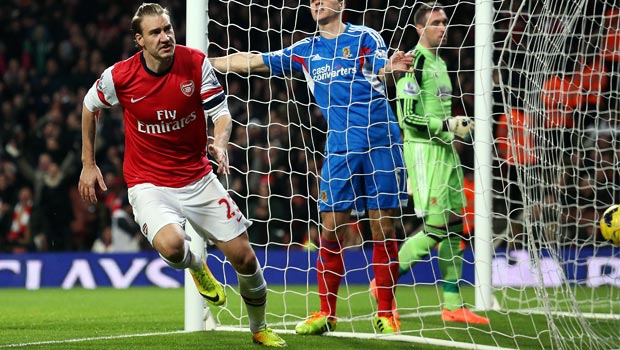 Arsenal boss Arsene Wenger insists that he has always believed in the ability of striker Nicklas Bendtner, after he netted the opener to help Gunners pick up a 2-0 win over Hull on Wednesday.

Wenger opted to hand the Denmark international a shock start for the home fixture with the Tigers after he had impressed with some hard work on the training ground.

Bendtner has received a lot of criticism over the last few years for putting in some lacklustre performances when given a rare chance but he managed to bring an end to a barren goalless run that stretches back to March 2011 for the Gunners by breaking the deadlock at the Emirates after just two minutes.

The 25-year-old took full advantage of his opportunity back in the starting line-up, with Olivier Giroud rested on the bench as the Frenchman looks to rotate his squad ahead of a busy period.

Summer signing Mesut Ozil added the second for the Gunners just after the restart of the second half to ensure that the north London club maintain a four point gap at the top of the table.

The Arsenal boss was full of praise for his striker at the full time whistle and expects he will have more of a role to play over the Christmas period.

Wenger said: “Nicklas has the qualities. His last performance was not convincing against Chelsea (Capital One Cup in October), but he has worked hard in training and deserved a chance.

“He has the stature, he has good technical quality, he has quite good pace. We had him as a boy of 15 or 16 and I made him sign a long contract twice so that means I always believed in his qualities.

“It all depends on his commitment and his fitness. He has worked hard recently and when he is physically sharp, he can compete with everybody. He had a good performance.”