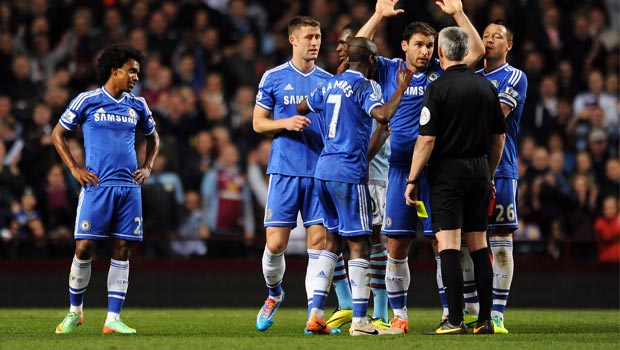 Chelsea boss Jose Mourinho felt referee Chris Foy had contributed to his side’s downfall after the Blues were beaten 1-0 at Aston Villa on Saturday night.

The west London outfit suffered a setback in the race for the Premier League title as Fabian Delph’s 82nd minute strike gave the Villans all three points.

However, Mourinho’s biggest problem with the game at Villa Park, other than his side’s failure to take anything from the match, was the sendings off of Willian, Ramires and himself.

Willian was the first to depart after being given a second yellow card for a trip on Delph midway through the second half.

After conceding, Chelsea seemed to let their frustrations get the better of them as Ramires was given a straight red card for an ugly two-footed lunge on Karim El Ahmadi in stoppage time.

In the melee that followed the Brazilian’s tackle, Mourinho was sent to the stands by Foy, leaving the Portuguese coach fuming with the official’s performance.

“We must be very, very unlucky to have another refereeing performance like this one,” said Mourinho.

“This is not about one mistake from a referee. This is about a performance from minute one to minute 94.”

Mourinho then denied he and skipper John Terry had tried to force their way into Foy’s dressing room to speak to the referee, but did reveal he had tried to talk to the official about his decisions.

“In the dressing rooms I tried to ask politely, can you give me five seconds? And he refused,” he added.

The defeat, coupled with Manchester City’s win at Hull earlier in the day, leaves Chelsea just six points clear at the top of the table, while their title rivals all have games in hand on the Blues.

Mourinho’s men will now have to put their league troubles to the back of their minds as they gear up for the Champions League last-16 second leg clash with Galatasaray on Tuesday.

Chelsea are 1.38 to win the game against the Turks, who are 7.59 to come away from Stamford Bridge with the win.