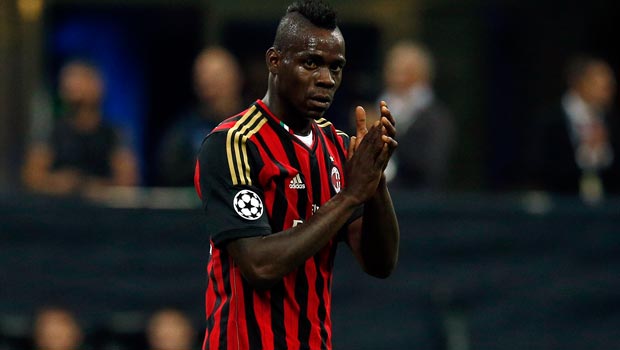 Mario Balotelli could miss AC Milan’s home clash with Parma on Sunday after being disciplined by coach Clarence Seedorf.

The Italian international made his comeback following a shoulder injury, in the Rossoneri’s Champions League defeat at Atletico Madrid in midweek.

But according to reports in Italy, Seedorf was unhappy with the striker’s attitude following their European exit and was excluded from training later in the week.

Balotelli had been the subject of some media criticism, somewhat unfairly, for his display at the Vicente Calderon in midweek. He was then absent from training on Thursday and, at the time, it was put down to a groin problem.

But now it’s been claimed that the former Manchester City man was told to do some work in the gym away from the other players, who were preparing for this weekend’s Serie A clash (Dafabet Match Betting – AC Milan 1.83, Draw 3.44, Parma 4.29).

Milan have refused to say anything about Balotelli’s absence from training, so it remains to be seen whether he will be part of the match-day squad on Sunday.

The 18-time Serie A champions have lifted themselves up the table to tenth, but they have recorded just two wins in their last six league encounters.

Last weekend’s 1-0 defeat at Udinese looks to have scuppered their hopes of a top-five finish and they now face an in-form Parma team that are four places above them in the table.

Former Milan star Roberto Donadoni has led Parma to a seven-game unbeaten run and they will be looking to do the double over Milan, having beaten them 3-2 in the reverse fixture in October.

Milan have failed to score in their last two league games, whilst Parma have kept back-to-back clean sheets – Under 2-2.5 goals can be backed at 2.21 with Dafabet.