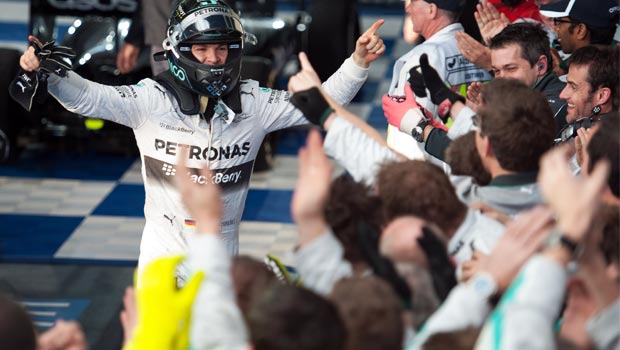 Nico Rosberg justified Mercedes’ tag as favourites for the 2014 Formula 1 season with a dominant victory at the Australian Grand Prix.

The Silver Arrows looked to have got to grips with the rule changes introduced for this year the quickest throughout pre-season testing and were tipped by some to lap the entire field in Melbourne on Sunday.

However, while Rosberg had a day to remember, his team-mate Lewis Hamilton was left reflecting on what might have been after being forced to retire three laps in with engine issues.

The Brit had started on pole but struggled as soon as the lights went out, dropping back to fourth before eventually heading back to the pits.

He was soon joined by reigning world champion Sebastian Vettel after he was forced out of the race due to a power-unit issue with his Red Bull.

In total, eight cars failed to finish the season-opening Grand Prix as the teams continue to come to terms with the changes to the technical specifications governing the cars.

Red Bull were one of those teams struggling with the new V6 turbo-charged engines and while Vettel’s day came to an early conclusion, his team-mate Daniel Ricciardo was able to secure a surprise podium for the Austrian outfit, coming home in second.

The Australian admitted afterwards that the performance of his RB had shocked him after such a miserable pre-season.

“A couple of weeks ago, I’d have put my mortgage on us not being here,” he said.

Joining him and Rosberg on the podium was debutant Kevin Magnussen, who ended McLaren’s 14-month wait for a return to the podium by coming home in third.

Team-mate Jenson Button ended the day in fourth, with Ferrari’s Fernando Alonso fifth and the Williams of Valtteri Bottas sixth.

The day belonged to Rosberg though, who came home 24 seconds ahead of the rest of the field as Mercedes laid down a marker for their title rivals.

“There is a lot of work to do. We can still improve a lot and we must because the competitors are not going to be asleep.”