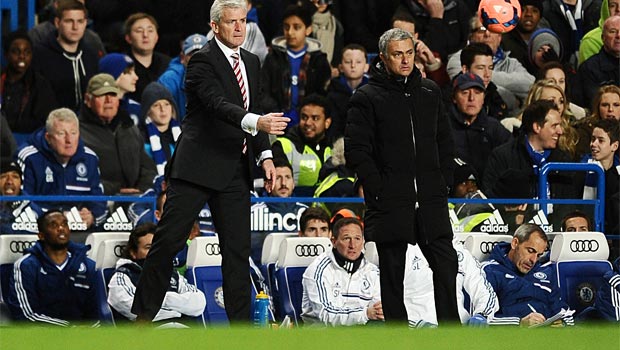 Chelsea boss Jose Mourinho says he is relishing an FA Cup fifth-round clash with Manchester City after seeing his side edge past Stoke City 1-0.

A solitary strike by Oscar was just enough to see off the Potters at Stamford Bridge and their reward for the win is a tough trip to last season’s losing finalists City.

It is the toughest draw possible but Mourinho is not concerned, saying to be the best you have to beat the best.

“No problem,” he said about the draw. “If you want to be the best you have to play against the best, so it’s good for us. Good experience, good game, big game.”

Meanwhile, 10-time winners Arsenal will entertain Liverpool at the Emirates Stadium in the other tie of the round.

It means two of the four favourites to win the FA Cup will be exiting the competition in the next round and that could leave the door open for a club like Everton to win it.

Toffees boss Roberto Martinez won it with Wigan last season and Swansea stand in his way this time as they look to book their passage through to the sixth round.

Wigan, who produced the shock of the last round when beating Crystal Palace, have more Premier League opposition when they take on Ole Gunnar Solskjaer’s Cardiff City.

The rest of the draw is Sheffield United/Fulham v Nottingham Forest/Preston, Brighton v Hull, Sheffield Wednesday v Charlton, Sunderland v Southampton, with all ties to be played on the weekend of February 15-16.