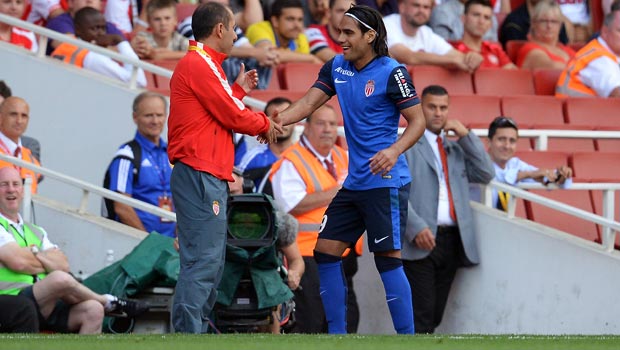 Monaco vice-president Vadim Vasilyev is confident Radamel Falcao will remain with the French club for next season despite constant speculation over his future.

Falcao continues to be linked with a move to Real Madrid this summer to join former Monaco and Colombia team-mate James Rodriguez.

Reports suggest the Champions League winners are still hopeful of wrapping up for deal for the former Atletico Madrid centre-forward with the possibility of an initial loan deal, but Monaco are determined to keep hold of their prize asset who joined in a £51million deal last summer.

Falcao returned to the starting line-up on Sunday after a serious knee injury and scored the only goal as Monaco beat Arsenal in the Emirates Cup.

Speaking afterwards, Vasilyev admitted the striker is ‘essential’ to their team for next season and insisted he won’t be sold.

“Falcao is essential to Monaco,” said Vasilyev. “I am very satisfied with his performance and the fact he scored.

New Monaco boss Leonardo Jardim has also cooled speculation over the future of the Colombia striker, who scored nine goals in 17 Ligue 1 appearances before his season-ending injury last term.

“At this point Falcao is our player and he’s with us 100 per cent and we don’t want to let him go,'” Jardim said over the weekend.

“It’s a pity we lost James [Rodriguez] but we can count on Falcao staying. Regardless of what people say, he’s our player.

“He’s in the final stages of his recovery and he’ll be with us this season.”