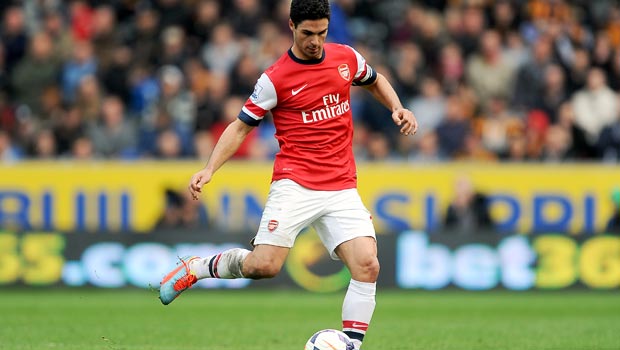 Spanish midfielder Mikel Arteta has no desire to leave Arsenal, according to his agent.

Arteta has entered the final year of his deal at the Emirates Stadium after joining the Gunners from Premier League rivals Everton in 2011.

The playmaker’s contract situation has led to speculation Arsenal could be prepared to sell Arteta this summer and Serie A outfit Fiorentina have been credited with an interest, but the midfielder’s agent Inaki Ibanez is adamant he will not be moving on this summer.

“The player has no intention to leave London,” Ibanez said to Italian radio station Radio Blu.

“We have not spoken to any club and I would like to remind everyone that we are talking about the Arsenal captain, with all respect for Fiorentina.”

Gunners boss Arsene Wenger is expected to strengthen his squad significantly during the off-season after his side’s failure to sustain a title challenge last term.

Wenger is closing in on the capture of France international Mathieu Debuchy from Newcastle United as he seeks a replacement for departed right-back Bacary Sagna, who has joined Manchester City.

The Gunners are also set to complete a £30million deal for Barcelona forward Alexis Sanchez, with the Catalan giants ready to sell Chile’s World Cup star to make room for the arrival of Luis Suarez from Liverpool.

It is also thought Wenger hopes to sign a goalkeeper to provide competition for Wojciech Szczesny, a holding midfielder and a striker before the 2014-15 campaign begins.

Arsenal face Premier League champions Manchester City in the FA Community Shield final on 10th August and the Gunners can be backed at 3.29 to win the match in 90 minutes.