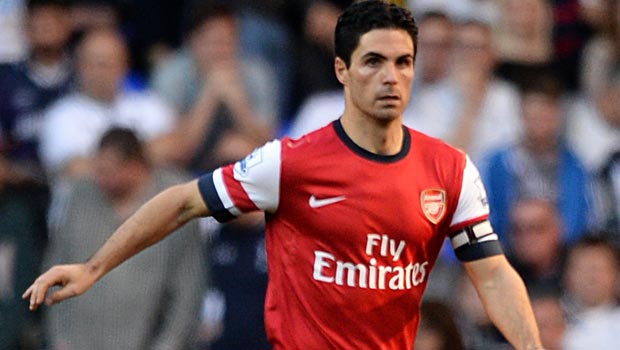 Mikel Arteta has moved to distance himself from reports that he could be set for a summer move and insists that he is more than happy with life at Arsenal.

The latest speculation suggests that Serie A giants Fiorentina have been keen to sign the midfielder but after his agent had earlier played down the claims, Arteta himself has followed suit and insisted that he is loving life at the Emirates.

“I can’t stop the rumours, but what I am certain is that I’m really happy here, I feel valued, I have been given a lot of responsibility and I like it,” said Arteta.

“Until they think something different about me, I’m happy.

“I had a conversation with the manager. He knows my opinion and we’re fine.”

This summer could well prove to be a big one for the Gunners as they look to mount a serious challenge for the title this season, having ended their nine-year trophy drought by winning the FA Cup last May.

Arsene Wenger has already signed the Chile superstar Alexis Sanchez for £35m this close season, but the activity will not be stopping there with Arsenal also linked with moves for Sami Khedira, Mathieu Debuchy and Loic Remy.

There may of course be more arrivals but Arteta believes that the capture of Sanchez is a real statement of intent.

“He’s the type of player we were looking for,” added Arteta.

“At some stage [last season] we didn’t have that pace up front with the injuries we had, but this year we will. We will be a threat in behind teams and he’ll give us another option.

“He’s a character, too. He’s a fighter and very ambitious. I think he’s the type of player that the Arsenal fans will really like.

“It is a very good statement to show where we are going. I think we are going in the right direction, the club is ambitious, the directors are ambitious and we are going to fight for big aims.”

Arsenal kick off their Premier League campaign with a home clash against Crystal Palace and they are installed as 1.29 favourites to open with a win, with the Eagles on offer at 8.06 and the draw at 4.98.