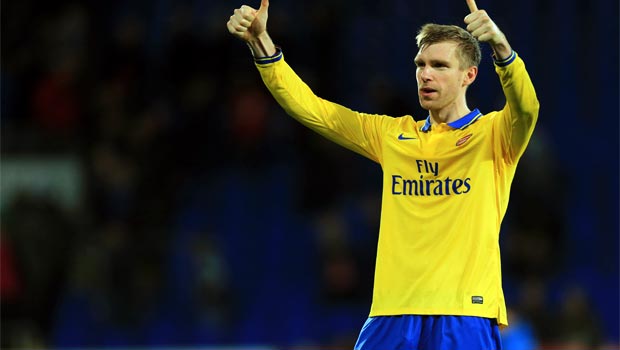 Arsenal defender Per Mertesacker admits the Gunners face a tricky run of fixtures in the run up to Christmas but says they will take it one game at a time, starting with Napoli.

The north London outfit have performed above expectations this season and currently sit atop the Premier League and their Champions League group.

However, the next three matches could prove pivotal in Arsenal’s season as they get set to face Napoli, Manchester City and Chelsea in back-to-back games.

First up is a trip to Italy to take on Serie A high-flyers Napoli, who need to beat the Gunners on Wednesday to have any chance of reaching the last-16 of the Champions League.

All Arsene Wenger’s men have to do is avoid a three-goal defeat to make it through to the knockout stages of the competition for the 11th year in a row.

It won’t be easy though, with the Azzurri having turned over fellow English clubs Manchester City and Chelsea at home in their past two European campaigns, while they defeated Borussia Dortmund in the first match in the group stages of this year’s competition.

The clash with Napoli is followed by a trip to the Etihad Stadium on Saturday to take on the free-scoring Manchester City.

Manuel Pellegrini’s men have already demolished Manchester United and Tottenham on their own patch and are favourites to add Arsenal to that list.

The intimidating run of matches concludes with a home match against Chelsea on December 23rd, a side who have already won at the Emirates Stadium this season having knocked the Gunners out of the Capital One Cup.

Despite facing three very hard matches Mertesacker is keeping his cool, insisting Arsenal won’t be overawed by the challenges that await them.

“We have tough games coming up over the next week and over the Christmas period,” defender Per Mertesacker told Arsenal’s official website. “We just want to go one game at a time.

“We are really relaxed, we don’t have to respond to anyone. We just have to do our job every single second of the game. That is our target, nothing else.”