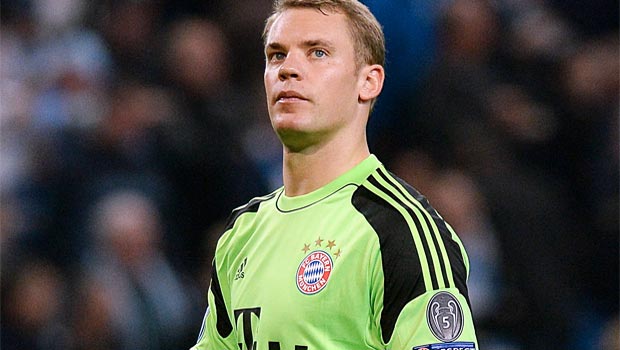 Bayern Munich boss Pep Guardiola issued a hands off warning to Manchester City after the English club were linked with a move for goalkeeper Manuel Neuer.

City boss Manuel Pellegrini is reportedly on the lookout for a new first choice shot stopper after losing faith in Joe Hart.

England international Hart has found himself on the bench for the last six Premier League games, with Costel Pantilimon handed the number one jersey in his absence.

The giant Romanian keeper is seen as just a stop gap until the January transfer window opens, with Pellegrini keen to add a world class goalkeeper to his ranks.

Real Madrid’s Iker Casillas has been linked with a move to the Etihad Stadium in the past but reports at the weekend suggested City were more interested in Bayern Munich‘s Neuer.

Germany’s number one has established himself as one of the top keepers in the world in recent times with a string of impressive performances for club and country over the last few years.

Speculation has suggested City could test Bayern’s resolve with a bid of £40million but Guardiola has told them to forget, telling the press when asked if they could land Neuer: “No chance.”

Meanwhile, Pellegrini has called on Hart to prove his worth in the coming weeks if he wants to become a regular in the starting XI again.

The 26-year-old will start City’s Champions League game with Bayern Munich on Tuesday and the Chilean admits it could be a crunch fixture for the shot stopper.

“I’m absolutely sure and I trust in him.”