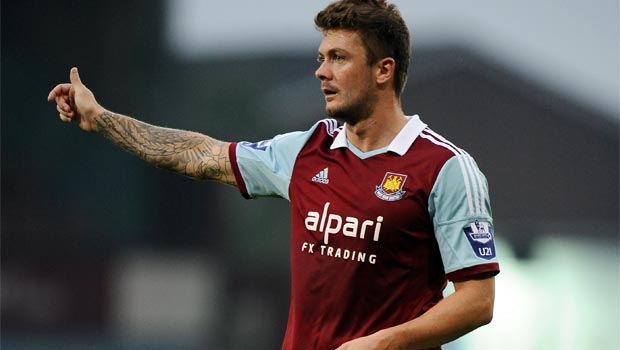 George McCartney says confidence in the West Ham camp remains high despite the recent disappointing run of form that has seen them drop to 19th in the Premier League table.

After finishing 10th on their return to the top flight last term, the Hammers were expected to push on this time around with some pundits even suggesting that they could be an outside shot to make the European places.

However, with record signing Andy Carroll unable to play at all this season so far due to a heel injury, Sam Allardyce’s men have struggled to build any momentum, although they have made it through to the semi-finals of the Capital One Cup.

Their run of six league games without a win has seen the pressure start to mount on Allardyce and Saturday’s draw with West Brom means the trip to fellow strugglers Fulham on New Year’s Day now looks like a must-win game.

Injuries to central defenders Winston Reid, James Collins and James Tomkins have only made things more difficult for the Hammers but McCartney feels it would be wrong to sack the boss and insists that everyone in the changing room is pulling in the same direction.

“We’re all in it together and we’re still doing all the right things on the training ground,” he said. “It is after Christmas now and when you find yourselves in the bottom three, everyone maybe gets a little bit edgy and games you feel you should be winning you’re just not getting across the line.

“It eventually catches up on you. The dressing room’s great and we’re just trying to move up the table again and get ourselves out of this situation.”

Allardyce is expected to draft in some reinforcements over the course of the next month with Peterborough youngster Jaanai Gordon already signed up, while Everton defender Johnny Heitinga and Southampton striker Rickie Lambert have also been linked.