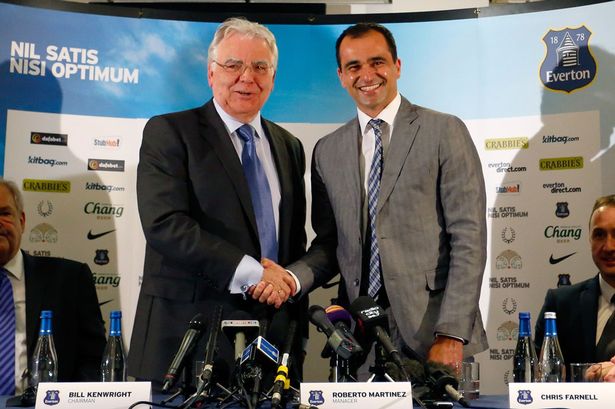 The announcement follows confirmation on Monday from Wigan chairman Dave Whelan that he had agreed a deal with his counterpart Bill Kenwright to allow the Spaniard to leave the DW Stadium.

Whelan had earlier suggested that he would let the former Swansea City manager to “only go to a big, big club and I don’t think Everton are big enough”.

Martinez was on a three-man short-list understood to also include FC Porto’s Vitor Pereira and former Schalke coach Ralf Rangnick.

The 39-year-old is charged with the task of replacing David Moyes, who will officially vacate his role at Goodison Park on the same day to take charge of Premier League champions Manchester United.

An Everton club statement released on Wednesday read: “Everton Football Club is today delighted to confirm the appointment of Roberto Martinez as its next manager. The 39-year-old Spaniard joins from Wigan Athletic and has signed a four-year contract at Goodison Park.”

Martinez guided Wigan to FA Cup glory last season but failed to prevent the north-west club from being relegation from the Premier League.

He takes on a side which, under the stewardship of Moyes, finished sixth in the Premier League last season and has secured a top-eight finish in each of the last eight campaigns.

The move brings to an end speculation about the future of Martinez, who turned down the chance to leave Wigan for Aston Villa in 2011 and was a target for Liverpool before Brendan Rodgers arrived last summer.

Wigan said in a statement: “Roberto’s influence at the club, both as a player and manager, an association that spanned over a decade, will remain unforgettable to all Latics fans.

“The club would like to place on record its appreciation for his tireless work during that time, culminating in FA Cup glory last month at Wembley Stadium.”