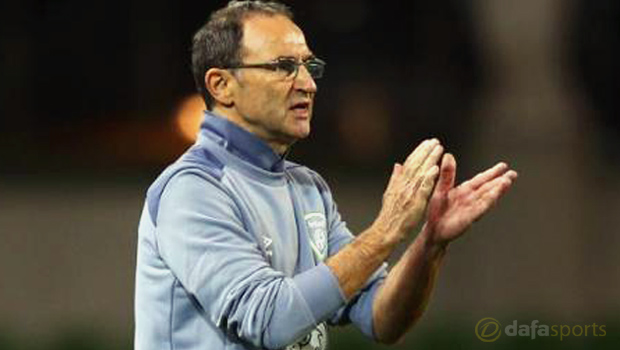 Republic of Ireland boss Martin O’Neill has confirmed his team are likely to finish their preparations for Euro 2016 at a training base in the United Kingdom.

The Green Army will take on the Netherlands in a friendly match in Dublin on May 27, with their first game of the finals taking place at the Stade de France against Sweden on June 13.

It had been suggested the Irish would head to a training camp in either Austria or Spain during the intervening period, but the former Sunderland boss has now confirmed his preference is to keep the squad close to their families before the tournament kicks off.

He said: “What we’re looking at, and nothing has been set in stone yet, is actually staying relatively local. We’re thinking about it at this minute.

“We’ve had the opportunity to go to a couple of places, Austria and somewhere else and that sort of stuff, but we thought that we might stay relatively local, local meaning within the UK.”

The 63-year-old is also refusing to rule out organising another friendly match before the finals, but he admits that a behind closed doors game could be just as beneficial for his squad.

He added: “I think after the Dutch game, we could still play another game, sort of a warm-up match, but we might get the same sort of benefit by playing ourselves in an 11 v 11, or a side made up of certain players depending on where we are.”

Ireland have been drawn in Group E for the tournament in France, and as well as taking on the Swedes, they will also face the world’s highest ranked side Belgium and 2012 finalists Italy.

O’Neill’s side are the outsiders to win the group at 10.00, but they are available at 2.38 to progress to the knock-out stages.