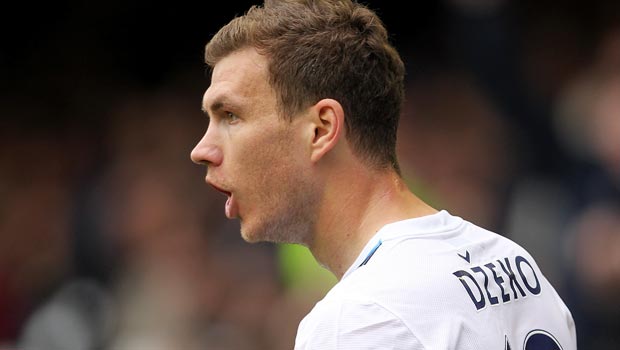 Manchester City boss Manuel Pellegrini says he is very happy Edin Dzeko will be staying with the club as the striker closes in on a new contract with the champions.

The Bosnia and Herzegovina international is set to be the next City player to commit his long-term future to the club after Vincent Kompany, Sami Nasri, David Silva and Aleksandar Kolarov all signed new deals earlier this summer.

A new contract for Dzeko will represent a remarkable turnaround for the 28-year-old, who this time last year was being linked with a move away from the Etihad Stadium.

Dzeko has since gone to become a vital part of Pellegrini’s plans, scoring 28 goals in all competitions last season as City won the Capital One Cup and Premier League.

The former Wolfsburg man was once again a key part of a winning City side at the weekend as he laid on the opener with a brilliant back-heel in the 2-0 victory at Newcastle for David Silva.

After the game, Pellegrini praised the striker and says he expects him to sign his new contract very soon.

“He finished last season playing very well and was one of the best players in this game,” Pellegrini said. “He worked hard and won a lot of aerial duels. It was a complete game from him.

“It’s not strange for me to see him play like that – he finished last season playing very well. He has grown. He’s a team player.

“I’m very happy for him. That’s why he is renewing his contract here – he has a very important duty in our team. But I repeat, Edin finished last season playing the same way as he has started.”

With Alvaro Negredo out with a foot injury, and Sergio Aguero working his way back to full fitness, Dzeko looks set to lead City’s attack in the early part of the season.

He will likely start next Monday’s big game with Liverpool at the Etihad Stadium, a match City are 1.90 to win. Last season’s runners-up are 4.05, while the draw is 3.37.