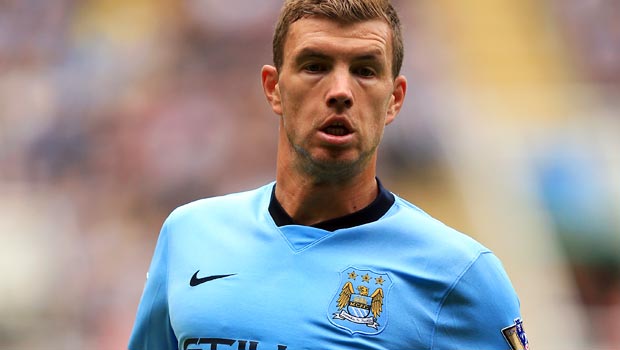 Edin Dzeko believes he can continue to improve as a striker after he signed a new four-year contract to keep him at Manchester City until summer 2018.

The 28-year-old Bosnia international joined City in January 2011 in a £27million switch from German Bundesliga outfit Wolfsburg and has scored 66 goals in 155 appearances in all competitions for the club.

Dzeko struggled for regular first-team football when Roberto Mancini was at the helm, but Manuel Pellegrini’s arrival last summer saw him become an integral part of the Chilean’s plans as he scored 26 goals to help City wrap up their second Premier League title in three years.

The big striker was linked with a move to pastures new this summer, but Pellegrini insisted he wanted to keep the player, while Dzeko always maintained that he was happy to stay at the Etihad Stadium.

And having won two Premier League titles, an FA Cup and the League Cup so far, he is looking forward to improving his own game and helping the club secure more silverware in the coming years.

Dzeko said: “I’m really happy here at City, it’s a second home to me, so it was an easy decision to stay for the long term.

“I knew from the beginning when I started here that I wanted to stay for a long time – I can’t see any place than here.

“I’m settled perfectly to life here, I know my team-mates, the club, the team very well and I feel like can improve even more.

“Over the last three-and-a-half years we’ve made history together but I feel like we are only at the start of something really special.
“There are still so many objectives and goals that I want to reach from my career in the game and I believe that I am in the perfect place to achieve them all.”

The Citizens are 3.25 to retain the Premier League title, while they are 1.85 to defeat Liverpool in their first home game of the season at the Etihad Stadium on Monday night.