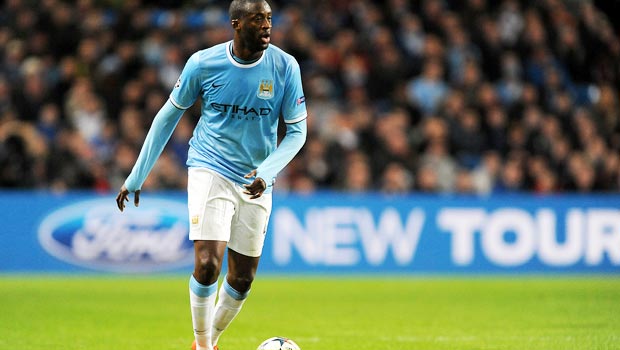 Manchester City’s bid to claim a second Premier League title in the space of three years was handed a boost when influential midfielder Yaya Toure declared he is fit for their final two matches.

The 30-year-old Ivory Coast star sparked fears of a fresh injury problem when he was substituted during the second half of Saturday’s vital 3-2 win at Everton which took them back to the top of the Premier League.

However, as City prepare for Wednesday’s game against Aston Villa at the Etihad Stadium, Toure spoke out to reveal his withdrawal at Goodison Park was more a precautionary measure to ensure he is fit for the game and Sunday’s Premier League finale against West Ham.

Toure told the club’s website: “It was very important I came off (against Everton). It has been difficult for me in a short space of time to recover from the injury I picked up at Liverpool and prepare physically.

“If you are not fully prepared it is very tough, because you have to be at 100 per cent for these games and coming back is always difficult, especially at the end of the season, but I feel good.”

Liverpool went back to the top of the table on Monday night, but only a point clear of City after they blew a three-goal lead in the final 11 minutes to draw 3-3 at Crystal Palace.

Therefore a victory against Villa could see City requiring just a point in their home game against the Hammers on Sunday because of their superior goal difference over the Reds.

And, while Toure is not expecting an easy game against either Villa or West Ham, he does expect City to complete the job.

He added: “Our target was always to win something, but for us the League Cup is not enough. The Premier League was always our target, so now we need to do be at our optimum levels when Aston Villa come to our stadium on Wednesday.

“We have worked so hard this year and, if we don’t win, it would be a massive disappointment for us, for the fans and for the club as well.”