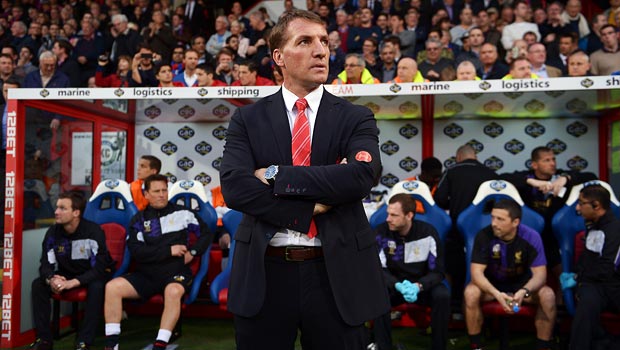 Liverpool boss Brendan Rodgers expects Manchester City to win the Premier League title after watching his side give away a three-goal lead to draw 3-3 at Crystal Palace on Monday night.

The Reds were cruising to victory at Selhurst Park as Joe Allen’s first goal for the club in the 18th minute was added to in the opening 10 minutes of the second half when Daniel Sturridge and Luis Suarez added to their respective goals haul for the campaign.

However instead of settling for the win, which would have taken them three points above City and ensured the race for the title would go down to the final day on Sunday, the Reds continued looking for more goals to try and eat away at their rivals’ superior goal difference.

They were eventually caught out 11 minutes from time when Damien Delaney’s deflected strike flew into the top corner of Reds goalkeeper Simon Mignolet’s net, before the Eagles capitalized on some poor defending to score two more goals in the final 10 minutes through substitute Dwight Gayle to snatch a share of the spoils.

Afterwards Rodgers blamed his side’s “decision-making” and “poor defending” for the way they caved in late in the game and when asked if it meant the end of Liverpool’s hopes of a first title since 1990, he told Sky Sports: “Yes, I think we needed to win tonight to keep the pressure on.

“Manchester City, they have got two home games now, two tough games, but we needed to win it. I think Manchester City will go on and win their two games and they will be champions.

“But for us it’s been an outstanding season up until now. For us to get 81 points, it’s a great achievement. We’re obviously disappointed now but we’ll go again.

“We have got a great game at Anfield now to finish the season and we’ll keep looking to build and develop what we’re doing.”