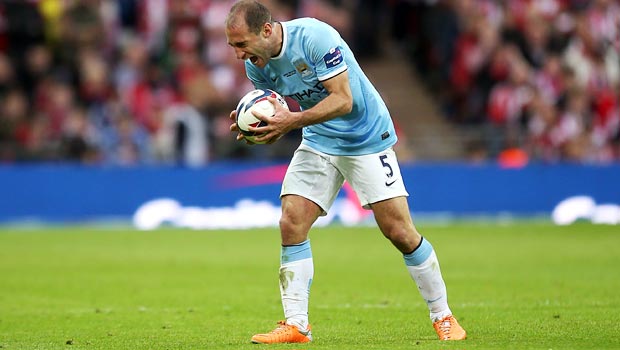 Pablo Zabaleta is backing Manchester City to go on and clinch their second Premier League title, but admits it could go to the final moments of the very last game once again.

In the 2011/12 season a goal from Sergio Aguero deep in stoppage time on the final day earned City a 3-2 win over QPR as they pipped Manchester United to the title and Zabaleta is prepared for the same again.

City entertain West Ham on final day of season, while Liverpool take on Newcastle, and there is every chance that goal difference could win it for City once again.

“We know that we’ve been in this situation two years ago and I think we had been talking about that last week,” said Zabaleta.
“The most important thing we’ve learned from that experience was the team spirit to keep fighting until the end.

“Whoever ends as the champions, it is because they will deserve it, and we are one of those teams who will fight for it.

“Hopefully we can continue to win the games and show one more time that these players, this team, this manager, all the staff, are still working really hard and are still very hungry for the title.”

Meanwhile Zabaleta is also refusing to discount Chelsea, who opened up the title race again with that 2-0 win at Anfield.

“Of course, we cannot forget Chelsea, they are a top team with a top manager,” he added.

“They showed that they are still very hungry for the title, so everything is very tight and it’s going to be a fantastic race until the end.”