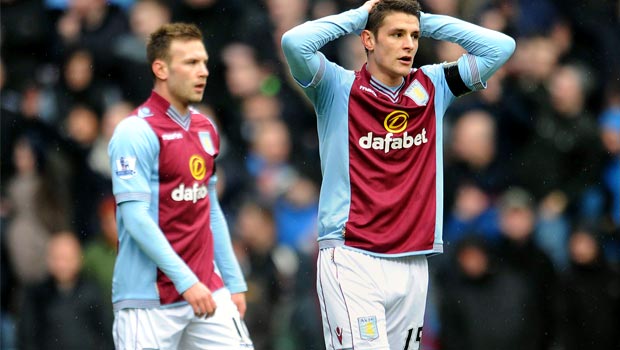 There is normally a long time between drinks when it comes to Aston Villa fans celebrating wins – of any kind – over Manchester United.

Their last success in the league, a 1-0 win at Old Trafford in December 2009, ended a 26-year barren run against United.

Since then United have gone unbeaten in nine games against the Villans who go into Saturday’s lunchtime fixture at Old Trafford in 12th place in the Premier League with 34 points from 30 games.

For once, given United’s poor form and their own lingering worries over relegation, Villa do not head north cast as lambs to the slaughter with nothing to lose.

Whilst there is considerable pressure on opposite number David Moyes to turn his side’s fortunes around, the same is true of opposite number and fellow Scot Paul Lambert.

In recording back-to-back wins over Norwich and Chelsea it seemed Villa would end another difficult season on a high. But, just as they thought they had turned a corner, they lost in embarrassing fashion, 4-1, at home to Stoke.

Villa are not out of the woods yet; they are nine points off the drop zone but have played a game more than Sunderland, who occupy the third and final relegation place.

And with their next five games after the trip to Old Trafford coming against sides in and around them in the table, a poor set of results could see them plummet.

At no point in the season has this most inconsistent of sides strung three straight wins together, although one worry for United is that Villa’s form away from Birmingham stands up pretty well.

While the Red Devils have already lost six times in front of their home faithful, Villa have won five and drawn four of their 14 away games in the league.

“Everyone is raring to go at Old Trafford. We want to make it really tough for them and take some points off them. That’s our mentality always”, Villa defender Jores Okore told his club’s official site.

“Our away form has been very strong this season. It would be great to add more points from now until the end of the season.”