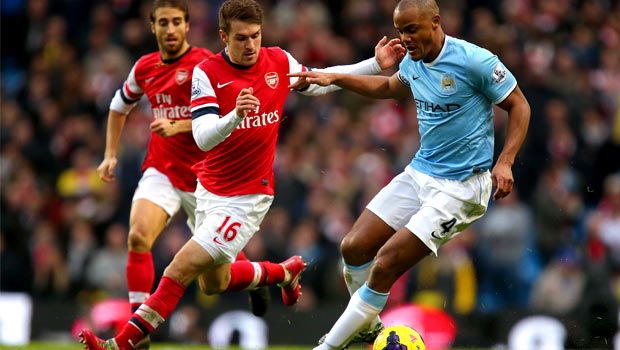 Arsene Wenger is unlikely to make many changes to the squad that drew 2-2 with Swansea on Tuesday night for Saturday’s crunch Premier League game against title rivals Manchester City.

Wenger has ruled out a return to action for midfielder Aaron Ramsey, or any of his other sidelined stars, whilst also reporting no fresh injury worries from the Gunners’ last outing.

“Compared to Tuesday night, we have no new injuries and no-one coming back as well”, Wenger said.

“[Nacho] Monreal should be the first one back in training because he is just starting to run in the next few days.

“After him, Ramsey is progressing well, but we need to be patient for a few more weeks.”

Arsenal, who are also without the likes of Jack Wilshere, Theo Walcott and club-record signing Mesut Ozil, are currently fourth, six points behind leaders Chelsea.

Despite playing the full 90 minutes in City’s 3-0 rout of neighbours Manchester United on Tuesday night, David Silva looks like missing the trip to north London after the Spaniard suffered a blow to the ankle which caused him pain after the game.

However, they will have a job on their hands finding a way past Joe Hart in the City net as the Manchester derby shutout was the sixth time in a row that Manuel Pellegrini’s side have kept a clean sheet.

Nearly 600 minutes of football have passed since Chelsea’s Branislav Ivanovic became the last opposition player to find the back of the City net.

City head to the Emirates as favourites to lift their second Premier League title in three years, and are available at 2.09 to do the double over Arsenal following their 6-3 win over the Gunners at the Etihad earlier this season.