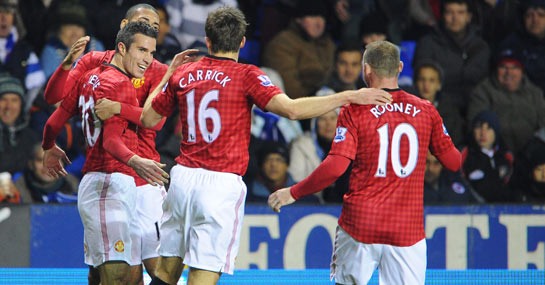 Royals will struggle to get a result at Old Trafford, but can find the net

It is unsurprising to see Manchester United as heavy favourites to beat Reading at Old Trafford, but little value can be found in their 1/6 price to do so.

Therefore, taking the 8/5 that Man United prevail in a match where both teams score could prove a wise move, especially in light of recent meetings between this pairing.

There have already been two encounters of these sides this season, with the Red Devils emerging victorious in a 4-3 thriller at the Madejski Stadium, before also triumphing 2-1 in an FA Cup tie in Manchester.

Of the hosts’ last five wins against the Royals also, they came out on top with their defence breached, further inclining that close attention should be paid to those 8/5 odds.

And in the same five games, four or more goals were registered on three occasions.

United are 1/1 to victor in a match that reaps in excess of 3.5 strikes, which also appears a very plausible outcome.

Handicap markets too have the scope for punters to profit in this game, with an emphatic home success the likelihood in light of Sir Alex Ferguson’s men winning 13 of their 14 Old Trafford league fixtures this term.

The Red Devils remain odds-on to prosper giving up a goal head-start, but are a better value 4/9, and such a bet would have brought returns in six of their home league games this season.

They also look good as 21/20 shots to succeed with a theoretical two-goal disadvantage meanwhile, as they would have done with plenty in hand last time out in league competition.

In that 4-0 demolition of Norwich, Robin Van Persie surprisingly failed to get on the scoresheet, but he could rectify here as he aims to retain the Premier League’s top scorer accolade.

He notched in the reverse fixture earlier this season, and is 5/2 favourite to break the deadlock in this clash.