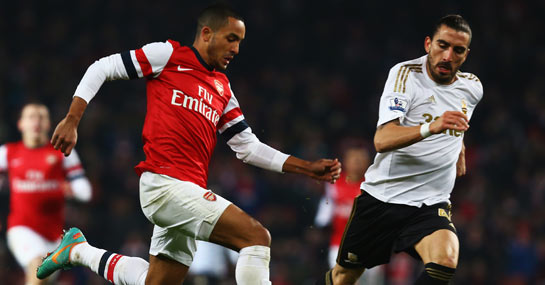 Earlier in the season, Swansea’s 2-0 victory away to Arsenal was arguably the first flashpoint for Gunners fans to call for Arsene Wenger’s head.

But after a 2-0 triumph at Bayern Munich restored some supporters’ faith in the Frenchman, another success at 6/5 can go a long way to repairing his strained relationship with a section of Emirates fans.

Arsenal’s elimination from Europe means that their remaining league fixtures now take on even greater importance, as they pursue a top-four spot.

And as such, they may well be worth backing to win a game in which both teams score at 13/4.

Each team found the net in the only previous two Liberty Stadium meetings of the pair, and after the Gunners dominated the last meeting, albeit in FA Cup competition, they can take maximum points here.

Those who do fancy the hosts though, who have won half of their last four matches against Arsenal, can have 21/10 about the Capital One Cup holders prevailing.

And with a 2-2 draw emanating from the last meeting of the pair in Wales, the stalemate could again see support at 5/2.

With preference for Arsenal in terms of match betting though, total results markets may be worth a look in order for punters to obtain greater value.

12/5 is available regarding a Gunners win featuring more than 2.5 goals, and a bet on such an outcome would have paid off in more than half of their wins this season.

A man that has taken on greater goalscoring responsibility for the visitors this term is Theo Walcott meanwhile, with the pacy attacker often contributing to high-scoring Arsenal wins throughout the campaign.

The 18-goal frontman can be backed to hit the opener in this match at 6/1, but is a more appealing proposition to find the net at any time during an Arsenal victory at 3/1.