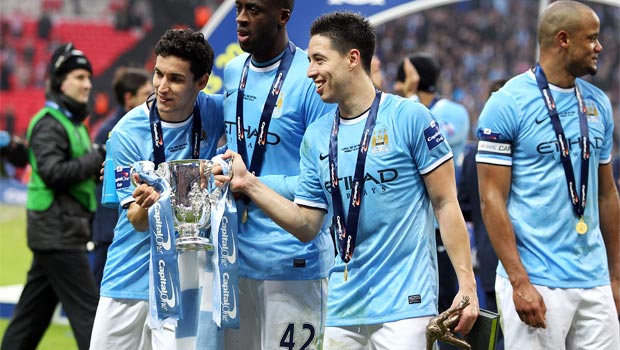 Manchester City midfielder Samir Nasri admits that the race to the Premier League title will be ‘tough until the end’ as they try to catch leaders Chelsea.

Jose Mourinho’s men have 10 games to go and are currently four points clear at the top of the table. Liverpool now sit in second place but it is the threat of Manchester City that could cause problems for all those chasing the title.

City are currently in fourth place six points behind Jose Mourinho’s side and two victories would see them reclaim top spot on goal difference. The Chelsea boss has tipped Manuel Pellegrini to go all the way with the Capital One Cup winners, and Nasri is confident they can win both their games in hand to go top of the pile.

However, the French midfielder insists that it will be not be easy to maintain that position and lift the trophy come the end of the season.

“I’m not scared about Chelsea or the league,” He told the Daily Mirror. “There is plenty more to play and everyone is going to have difficult games.

“If we win our two games in hand, we are going to be top of the league. But it’s better not to talk and to act on the pitch.

“We’re there in the league and if we win our two games in hand, we will be top with Chelsea.

“It’s going to be tough until the end because Liverpool are still there too.”

City’s attention for now will turn to the FA Cup where they take on Wigan Athletic on Sunday. City are 1.75 favourites to lift the trophy and they will be looking for revenge after the Latics beat them in the final last season.

Uwe Rosler’s side are priced at 14.29 to repeat that feat at the Etihad Stadium this weekend, with City strong favourites at 1.15 to progress while a draw is on offer at 7.12.