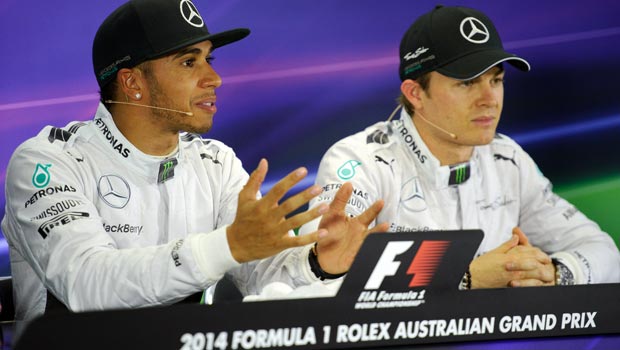 Lewis Hamilton showed that Mercedes mean business ahead of the Australian Grand Prix by setting the fastest time in Friday practise at Albert Park.

Hamilton scorched round the Melbourne circuit during the second session in a time of one minute 29.62 seconds, 0.157 seconds faster than Mercedes team-mate Nico Rosberg.

New rules ahead of the 2014 F1 season mean that many of the usual leading lights, including Sebastian Vettel, will struggle until technicians iron out various issues.

One major problem is the new V6 power units, with drivers struggling to handle the extra torque and reduced downforce, causing them to over-steer at each bend.

Not so Hamilton though, who even though he was pleased with what the Mercedes technicians have produced, feels there is more improvement to come.

“I was trying to feel the car. I missed obviously P1 which I felt like was a big back-step,” he said trackside after practise.

“I’m satisfied with P2…Not the most perfect day but I’m really glad I got some run in P2 and just grateful I got some time to feel the car.

“For me, it didn’t feel like a good lap. I’d only done a few laps until then. So I’ve still got a lot to improve on, a lot to find (out). Otherwise the balance doesn’t feel too bad.”

Reigning four-time champion Sebastian Vettel finished fourth in practise, and said: “I learned a lot today, we’re in a much happier place already.”

On just this bare evidence though, Vettel will struggle throughout the forthcoming season to gain a fifth title, with Hamilton already favourite to take the German’s crown.