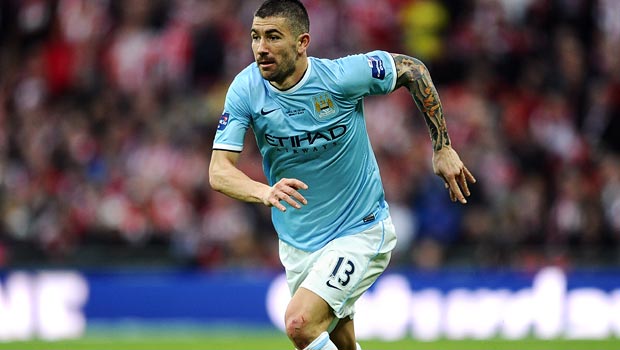 Manchester City’s Aleksandar Kolarov admits that it will be tough to win the Premier League this season and feels they might need to win all 12 of their remaining matches.

City, who are priced at 2.26 to win the Premier League, are currently six points behind table-topping Chelsea but have two games in hand on the Blues and a vastly superior goal difference.

The Etihad Stadium outfit are still fighting on three fronts this term, having already secured the Capital One Cup at the weekend with victory over Sunderland in the final.

An FA Cup quarter-final clash with holders Wigan is next on the agenda for Manuel Pellegrini’s men, followed by the return leg of their
last-16 Champions League tie with Barcelona.

And, with Jose Mourinho’s men set to play Spurs in the Premier League at the weekend, the Citizens could find themselves nine points adrift in the race for the title.

Their fate will still be in their hands, however, but Serbian Kolarov acknowledges how tough it will be to keep in the title race with the end-of-season fixture pile-up.

“It will be very difficult to the very end because now we have played two games less than Chelsea and we need to win them,” said Kolarov.
“It’s very important we do that because we want to keep things in our own hands.”

And the 28-year-old former Lazio man believes that City might not be able to afford even one slip up if they are to regain the title from rivals and neighbours Manchester United.

“It’s massive for us, we might need to beat every single team we play between now and the end of the season to win the Premier League,” he added.