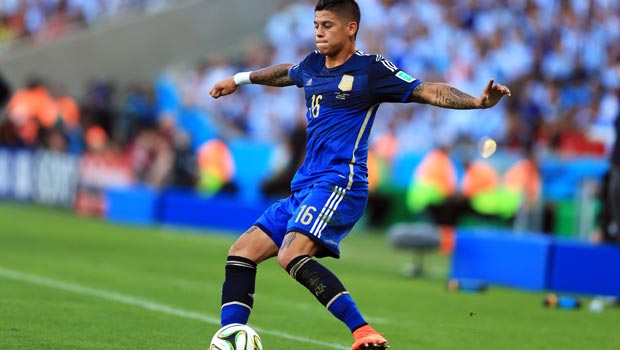 Manchester United manager Louis van Gaal has revealed that he was ‘enchanted’ by new signing Marcos Rojo after watching videos of the defender during the World Cup.

Van Gaal took over the Red Devils, who are priced at 10.00 to win the Premier League, following the conclusion of the World Cup where he was in charge of his homeland Holland.

The Oranje surprised many as they made it to the semi-finals before they were sent home by Rojo’s Argentina on penalties after a goalless draw.

The Dutchman revealed that he analysed footage of Rojo and the rest of his national team mates in the build-up to the clash and immediately became an admirer.

Rojo played in all of the South American sides games in Brazil including the final, which saw Alejandro Sabella’s outfit beaten 1-0 by Germany.

The former Bayern Munich and Ajax boss admitted he is delighted to have the chance to work with the 24-year-old, who completed a £16million move from Sporting Lisbon earlier this week.

The 63-year-old feels that Rojo will easily slot in to his 3-5-2 system as he is able to play in the heart of defence or on the left side.

Van Gaal said: “I played him in the World Cup against Argentina, so I had to analyse Argentina.

“[From] that video I was already enchanted about him because my philosophy is you have to buy players who fit in the profile, and I think Marcos fits in the profile as a left central defender but also as a left wing back.

“He played a fantastic World Cup, so I am very pleased.”