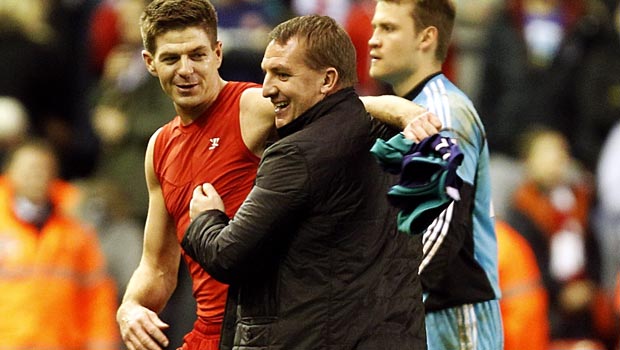 Steven Gerrard feels manager Brendan Rodgers has breathed new life into Liverpool and hopes the club’s owners can keep hold of him.

The Merseysiders have been on an upward curve ever since the Northern Irishman replaced Kenny Dalglish at the helm and they are, for the first time in years, genuine title contenders.

The Reds sit second in the Premier League table and are four points behind Chelsea but with a game in hand, and it looks set to be a fascinating run-in to the end of the season.

It took Rodgers some time to put his stamp on a club that had seemingly taken a backward step in appointing Dalglish but, having spent just two years in the job, the former Swansea man is earning plenty of plaudits for the manner in which his charges play the game and for the results they are achieving.

Anfield has become a fortress once again, with 12 wins and one draw from 14 top-flight fixtures this term, and their 5-1 home victory over Arsenal back in February was one of the performances of the season.

Rodgers has built a talented and hard-working squad, who look set to return to the Champions League next season, and club captain Gerrard was full of praise for the work down by the 41-year-old tactician.

“He is a young coach who has earned the right to become Liverpool manager and from week to week he is improving and he has been an absolute breath of fresh air to this club,” he said.

Rodgers’s contract will be up for renewal at the end of next season and Gerrard feels it is high time that the powers that be got together to secure the future of the man who has brought the good times back to Anfield.

“When players are in this situation with a year to go you want to keep hold of them so desperately, the club react really quickly and get it sorted,” he added.

“And for me I think he deserves a very long contract here and I think he is perfect for this club.”