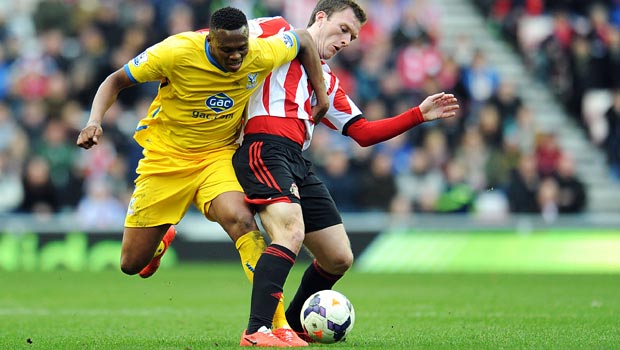 Defender Wes Brown feels Sunderland’s display against Crystal Palace was good enough to suggest that they can get out of trouble.

The Black Cats came in for some criticism from fans and the media alike for failing to score against their fellow strugglers in Saturday’s goalless draw, and they remain in the drop zone, three points from safety and with the Eagles one place better off.

But the Wearsiders do have two games in hand over their relegation rivals, while Norwich, Cardiff and Fulham have played three more Premier League fixtures than Gus Poyet’s side.

The Uruguayan helped to stabilise the club after their dreadful start under Paulo di Canio and, having looked dead and buried at one stage, they have spent time out of the bottom three.

But a run to the Capital One Cup final and to the last eight of the FA Cup has seen them slip down the table and fall behind in their fixture schedule.

It was suggested after the Palace stalemate that the feel-good factor at the club had gone, with both cup competitions now a thing of the past, but Brown does not feel that is the case and believes they could easily have beaten Tony Pulis’s side.

“I wouldn’t say the bubble has burst,” he said. “If we’d played badly maybe you could agree with the people who say that, but we have played well enough to win this game.”

The north-east outfit have picked up more points away from the Stadium of Light this term, and they are priced at 3.38 to beat Norwich City at Carrow Road on Saturday, with the Canaries offer at 2.18.

And former Manchester United ace Brown is at a loss as to why he and his team-mates struggle on their own patch.

“I’m not absolutely sure why we seem to play better away from home,” he added. “We have managed to score goals away and it has been totally different at home. Maybe some of the pressure is off, I don’t know.”