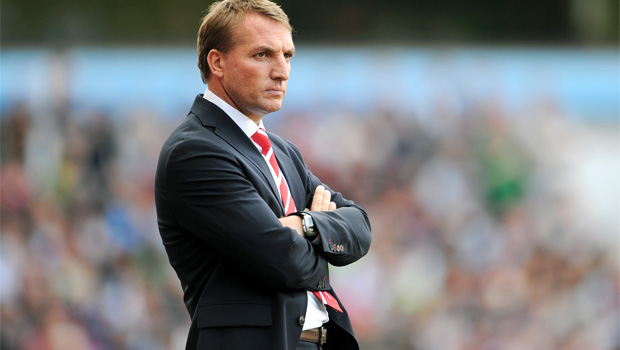 Liverpool boss Brendan Rodgers remains reluctant to say his side are Premier League title contenders despite their dramatic 3-2 win over Fulham on Wednesday that moved them to within four points of the top.

The Reds followed up Saturday’s emphatic 5-1 success over Arsenal with a hard-fought victory at Craven Cottage thanks to Steven Gerrard’s injury-time penalty.

In terms of performances, the two games were a world apart, but Rodgers’ men showed huge character to twice come from behind to claim what could be a precious three points.

Rodgers insists securing a top-four place remains the target but admits they will do all they can to finish as high as possible.

“We’re chasing and there are other teams still ahead of us, so we’ll need some of them to drop points, but we know we still have City and Chelsea to play at home.

“This was a very important win for us, coming after the game at the weekend when we’d been outstanding [in beating Arsenal 5-1]. We had to show different qualities tonight: character, togetherness as a group, as we kept pushing to the end.”

Next up for Liverpool is an FA Cup fifth-round clash at Arsenal and midfielder Jordan Henderson says they have already focused on the trip to the Emirates.

He said: “We’re delighted with the (Fulham) result and now we need to recover and get ready for the FA Cup tie at Arsenal on Sunday. It’s a competition we want to do well in and we want to kick on again.

“All our focus is now on Arsenal as we know we’ve got a tough game coming up this weekend.”