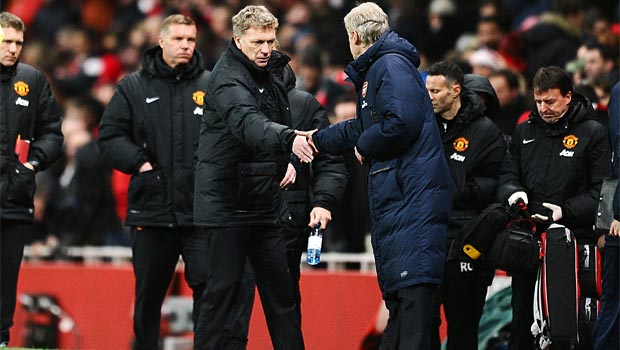 Man united David Moyes is refusing to give up on a top-four finish for Manchester United this season despite Wednesday’s 0-0 draw at Arsenal leaving them 11 points away from a Champions League qualifying place.

United left the Emirates with a point from a disappointing match and with just 12 games to go, they face a huge fight to make it into the top four.
Moyes’ men are 11 points behind arch-rivals Liverpool, who currently occupy fourth spot, but the boss says no-one is giving up yet.

“If there is one club who have been great at winning games in the second half of the season, and putting pressure on the teams above, it is Manchester United,” the Scot said.

“We will continue to do that and try to make it work. We can only do our job the best we can. We want to make it better and we can’t bother about other teams. All we can do is try to win our next game.”

It has been a campaign of transition for United since Moyes took over from Sir Alex Ferguson and the former Everton manager has come in for plenty of criticism from some fans, who have accused him of limited tactics and a cautious approach at times.

However, they could have claimed a morale-boosting win on Wednesday as former Gunners striker Robin van Persie missed two great chances and Moyes was quick to praise his players, who he says are doing everything they can to get the champions firing again.

He added: “Their attitude in training and commitment is first class. They are a great, very experienced group of players. They have won things and got the medals and when you have won, you want to win more. I still think they are hungry.

“I thought we did a lot of good things. We had a good shape, were nice and compact. Arsenal is a hard place to come and they have been having a great season. If you had told me at the start of the season we would take four points off Arsenal I wouldn’t have been too disappointed.”

United are now set to head off to Dubai, with no FA Cup game this weekend, before returning to action in the league against Crystal Palace on February 22, a match they are 1.60 to win with Palace rated at 5.28, while the draw is 3.50.