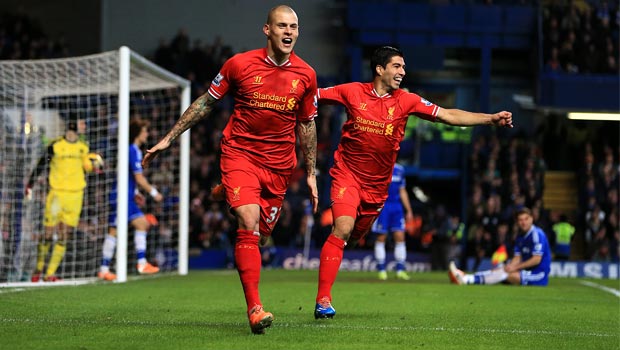 Liverpool boss Brendan Rodgers has labelled Martin Skrtel as one of “the top centre-halves in the league” following his performances of late.

Skrtel grabbed a brace in Liverpool’s 5-1 win over Arsenal at the weekend but it is his defensive efforts that have earned him praise from the manager.

The Slovakian found himself out of the side in the second-half of last season and was heavily linked with a move away, but instead remained at Anfield and has been a key figure for Liverpool this season.

Rodgers has now moved to pay tribute to Skrtel, who he feels has improved as a player after falling out of favour and forcing his way back into the side.

“He looks a class act. It’s a big credit to him that he’s been able to prove me right,” Rodgers told the Guardian. “Obviously I want a certain way on the training field and in games and he didn’t feature so much in the second half of last season.

“A player has the chance to either kick up a fuss or sit down with his manager and see what areas he can improve. All credit to Martin; he has taken the responsibility to be a better player. His use of the ball is more composed, he’s taken on a real leadership role with the young players and his consistency has been at a really high level.

“He is up there with the top centre-halves in the league. I’m really pleased for Martin. He’s a good man and has shown that even an international player can learn if he is willing to. But I wouldn’t have let him take a penalty for his hat-trick on Saturday if we had got one.”

Liverpool travel to Fulham on Wednesday and can be backed at 1.38 to secure the victory.

Skrtel himself is desperate for the Reds to take all three points at Craven Cottage but he expects a tough test against the west London side, who are the Premier League’s bottom club and battling against relegation.

He said: “We have showed some perfect performances at Anfield and we must try and do it away as well. Fulham is going to be a tough game because they are fighting against relegation but we just need to go there and play with the same intensity that we did against Arsenal.”