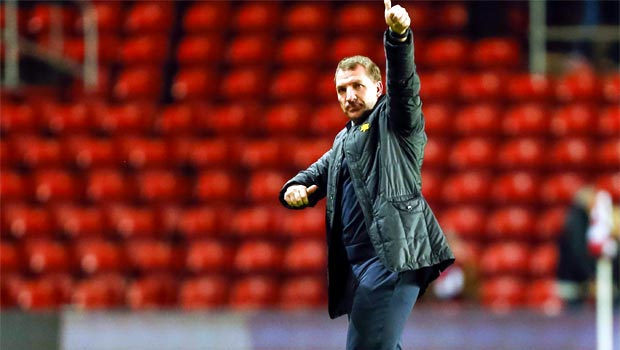 Liverpool boss Brendan Rodgers is happy for the club’s fans to dream of glory but insists that he and his players are staying grounded.

The Reds go into Saturday’s clash with Southampton in fourth place in the Premier League standings – just four points behind table-topping Chelsea – and they can be backed at 2.08 to claim all three points.

With most managers seemingly distancing themselves from being in the title race, it was suggested by Chelsea chief Jose Mourinho that Liverpool are actually favourites due to their lack of involvement in European competition.

Whether or not that is the case is open to question, but there is still everything to play for over the remaining weeks of the campaign.

The Merseysiders have been starved of league success for more than 20 years after Manchester United, Arsenal and Chelsea challenged the Anfield club’s status as the top team in the country.

But Rodgers is happy for the fans to start believing that the good times are now just around the corner, while keeping his players’ feet firmly on the ground.

“It’s great for supporters to dream,” he said. “It’s great being in the city and listening to supporters talk, I sense a real excitement and anticipation and they deserve that.

“For us, we’re very calm, we’re focused on what we need to achieve and we just go into every day looking to maximise the most we can get out of training.”

Mamadou Sakho and Lucas Leiva have both returned to full training following injury but the trip to St Mary’s will come too soon for Lucas, while a late decision will be made on Sakho.

Saints boss Mauricio Pochettino is ready to give the majority of the squad that slipped up 3-1 at West Ham the opportunity to atone for that defeat and they can be backed at 3.29 to claim the spoils.

Victor Wanyama and defender Jos Hooiveld are injury doubts and will be assessed ahead of the match, but it looks as though Wanyama is likely to miss out.