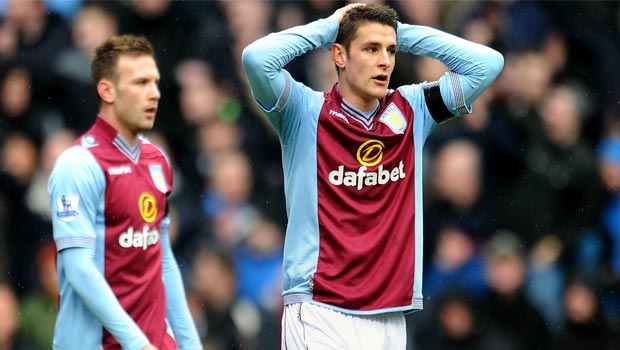 Ashley Westwood has urged the Aston Villa faithful to get behind the team as they face a crucial Premier League clash with Norwich City on Sunday.

The Midlanders are 13th in the top-flight table, with 28 points from 27 games played, but are only one place above the Canaries on goal difference alone.

Both clubs are not safe from the threat of relegation as they sit just four points clear of 18th-placed Sunderland and every game between now and the end of the season is crucial.

The Villans have taken just one point from their last four games, while Norwich have claimed four and the home side can be backed at 2.09 to beat their East Anglian rivals, with Norwich on offer at 3.49.

Home form has been the key to Villa’s woes this term as they have won just three times at Villa Park and scored only 12 goals on their own patch all season.

And Westwood feels that the supporters could play a big part at the weekend and throughout the rest of the season.

“When the fans are on their day and getting behind us, there’s no team stopping us,” he said. “We need them.

“It’s a combined effort. If we put in the performances then the fans will cheer us on.”

Westwood should be fit to play after limping out of last weekend’s defeat at Newcastle with a dead leg, but Yacouba Sylla is on standby.

Villa’s January transfer target Wes Hoolahan is expected to play some part for Chris Hughton’s side after finally making his return to first-team duty in the 1-0 home win over Tottenham.