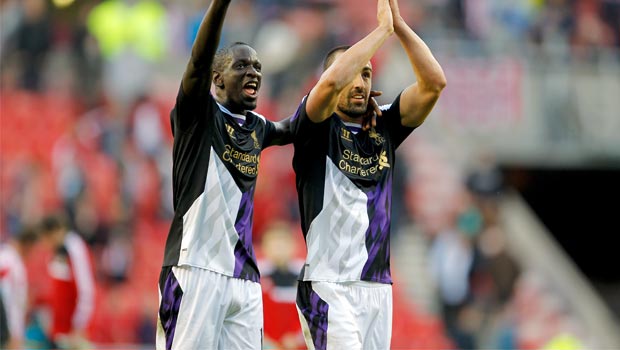 Liverpool boss Brendan Rodgers could welcome back Lucas Leiva, Mamadou Sakho and Jose Enrique in the next few weeks to help his side’s bid for a top-four finish this season.

With Liverpool’s injury problems starting to ease, Rodgers could soon have a nearly full-fit squad to choose from at a pivotal part of the season. The Reds are eying a top-four spot and their chances have dramatically improved due to recent results.

Their 5-1 win against Arsenal gave them a lift and Chelsea’s 1-1 draw with West Brom also closed the gap at the top of the Premier League.

Lucas was not expected to return to full-fitness before March after injuring his knee against Aston Villa, but he is reportedly ‘weeks’ ahead of schedule.

Confirming the news, Liverpool head of performance Glen Driscoll said: “Lucas Leiva was due to be in a brace for six weeks, according to specialists’ opinion, but yesterday he was outside running just over three weeks in, which is fantastic and shows just how ahead of schedule he is.

“Mamadou Sakho actually had a tear in his tendon and not the muscle of the hamstring as initially reported. For a whole host of reasons tendons take longer to heal, but he is working hard and progressing.

“Jose Enrique also had a complex knee issue and following surgery is in the process of achieving his final strength gains before he can return to training.

“Without providing specific dates, I would hope that by the end of the month we should start to get the likes of Jose, Lucas and Sakho back.”

In addition to those three, the Reds are set to welcome back Glen Johnson and Daniel Agger soon. Both have been back in training this week and, while Wednesday’s trip to Fulham could come too soon for them, the weekend FA Cup fifth round tie at Arsenal may see them return to action.

Rodgers will be hoping he can select one of his returning players when they welcome Swansea City to Anfield on February 22. The Reds are 1.31 to win, with Swansea big outsiders at 7.11.