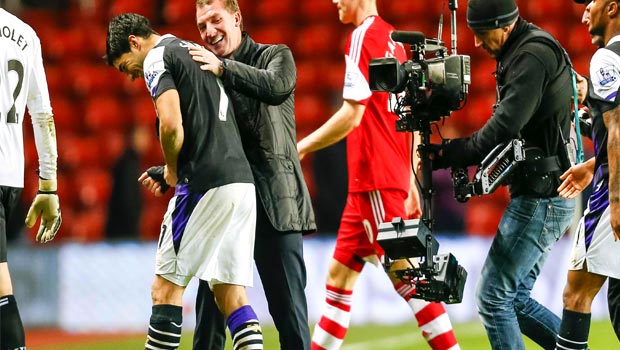 Luis Suarez says he could not be happier at Liverpool and is determined to play Champions League football with the Reds next season.

Suarez came close to leaving Liverpool in the summer following some troubled times in English football but he now seems more settled than ever.

The striker is in the form of his life on the pitch as well after firing home 24 goals so far this season as Liverpool have made their way to second place in the Premier League table.

Liverpool have a sniff at winning the title but a place in the top four and Champions League football next season looks pretty much in the bag and Suarez cannot wait for some big European nights at Anfield.

“Things are going perfectly for me,” he claimed. “We are fighting for the title but above all we are very close to qualifying for the Champions League.

“I cannot wait to finally play the big European matches at Anfield. I could not do it in these three seasons and when my team-mates tell me about the atmosphere of those nights it gives me goose bumps.

“This year we can achieve it, I feel we’ll do it. And I don’t lose the club since I have recently extended my contract.”

Even so Suarez will always be linked with a move away from Liverpool and, speaking to the Italian press, he refused to rule out a move to Serie A in the future.

“For a South American player who wants to get into history, it is advisable to have an experience in Serie A.

“Italian football is a top level and I follow it assiduously. Two years ago I received an offer from Serie A, I don’t want to name the team, it was a difficult time for me, but after thinking about it I decided to stay in Liverpool.”