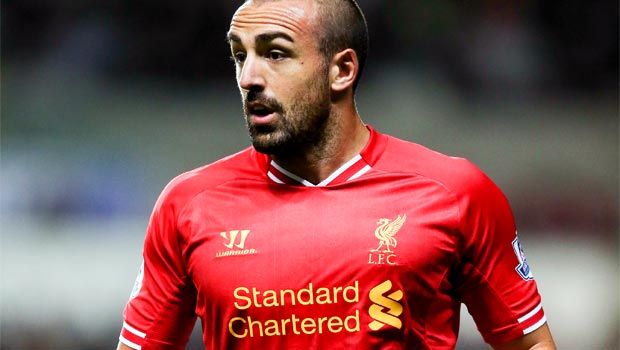 Liverpool defender Jose Enrique looks set to be out for at least two months after boss Brendan Rodgers revealed he is set to undergo knee surgery.

Enrique has been hampered by a troublesome knee injury over the past month but he did return to action as a substitute in the 4-0 win over Fulham before the international break.

However, he has suffered a fresh setback in training and is now definitely out of this weekend’s Merseyside derby at Everton, with a longer spell on the sidelines likely.

“Jose Enrique has been struggling for a little while with an injury,”
Rodgers told talksport. “He will probably need an operation. It’s a blow for us because he’s a very talented player.”

In Enrique’s ongoing absence, Rodgers will have to decide if loan signing Aly Cissokho is good enough to continue at left-back despite some poor displays, or he could use Glen Johnson or Mamadou Sakho in that position.

Meanwhile, in a surprise development, Liverpool‘s academy director Frank McParland and academy head of coaching Rodolfo Borrell have both been removed from their posts.

The pair were both appointed when Rafa Benitez was in charge of the Reds in 2009, and were credited with the development of several young players who have become part of Rodgers’ first-team squad, including Raheem Sterling, Martin Kelly, Andre Wisdom, Suso and Jon Flanagan in recent years.