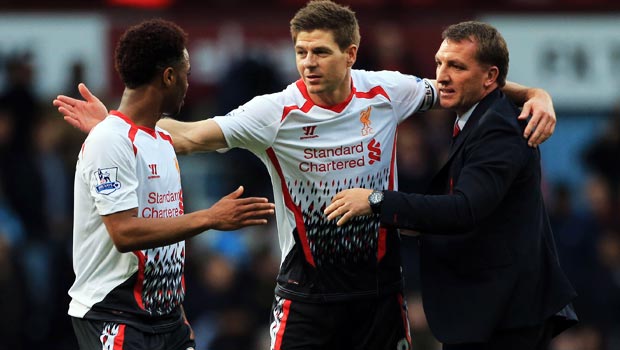 Liverpool boss Brendan Rodgers is busy working on his list of transfer targets and says in an ideal world any new player will be able to play in a number of positions.

The Reds were the surprise package of this season as they took the Premier League title race to the last day, but next season it will be even harder to compete at the top.

Manchester City, Chelsea and Arsenal will all strengthen, Manchester United could be a force again, while the Reds will also have the extra games in the Champions League to contend with, meaning the squad will need more quality and strength in depth.

Rodgers could have in the region of £60million to spend and he hopes to strengthen his squad with versatile players, who can adapt to different positions and formations.

“Our criteria that we look for is players with strong technique and football intelligence,” Rodgers revealed.

“They need to mentally have the attitude and the capacity to learn and they have to be so hungry to fight for every ball on every day in training and in the game.

“You’ll get some players who are specialists and who need to play in particular positions, but if we can get players in who are multi-functional, and can play in different roles and are multi-dimensional in their work, it sets us up and gives me more options as a coach.”

Rodgers was speaking after Liverpool’s 4-0 friendly victory over Shamrock Rovers in Dublin on Wednesday, when he gave many of his fringe players a run out.

As well as signing up to five new players, with Southampton playmaker Adam Lallana and Sevilla left-back Alberto Moreno among his top targets for now, Rodgers is likely to offload several first-team squad members with the futures of Pepe Reina, Daniel Agger, Iago Aspas, Luis Alberto and Sebastian Coates’ among those in doubt.