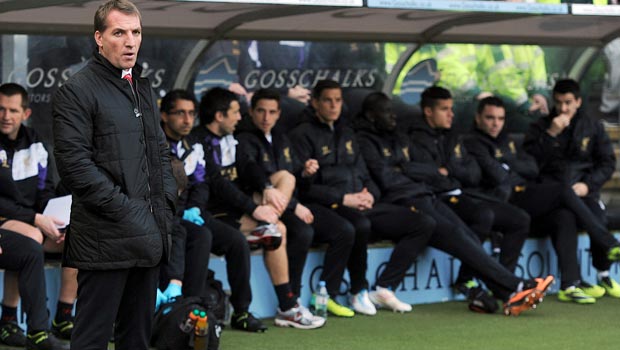 Liverpool manager Brendan Rodgers has hinted he will look to make some big name signings in the summer but insists he won’t be spending money for the sake of it.

The Reds look as though they will end their Champions League exile this season after a five-year absence, making it easier for Rodgers to attract players to Anfield.

Having shot up the Premier League table this year after a tough first campaign in charge, Rodgers is keen to take advantage of the club’s momentum and make some quality additions.

The lack of Champions League football has made it tough for the Northern Irish coach to attract players in the past, with Henrikh Mkhitaryan and Willian reportedly turning Liverpool down last summer because they weren’t in Europe.

While Rodgers is happy to find himself in a better bargaining position 12 months on, he insists he won’t go overboard on the spending as he is convinced a player’s price tag doesn’t guarantee they will be a good acquisition.

The 41-year-old says he is targeting players who he feels will fit his philosophy at Liverpool.

“Once you put your ideas in place and once the players start to crack it, then we will have success,” said Rodgers.

“Money can’t buy that. Teams spend a billion quid and it does not guarantee anything.

“We will be in the market for good and top players but there is more to it than that.

“The money is great and we will be in the market to compete but what is important is still having a vision of how you want the club to progress.”

Rodgers could have even more success in the transfer market if his Liverpool side come out on top of the Premier League title race.

The Reds are four points off league leaders Chelsea heading into the game with Cardiff on Saturday and are price at a tempting 4.25 to finish top of the pile.