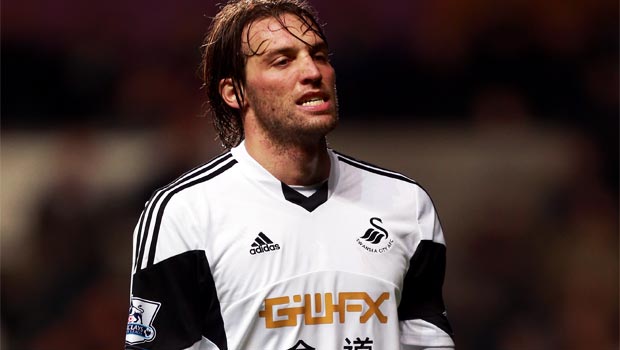 Swansea City boss Michael Laudrup has confirmed the news about his star striker and revealed that Michu needs an operation which will rule him out for about six weeks.

The Swans were bracing themselves for the worst with Michu having struggled for fitness for much of the season and scans have finally confirmed the extent of the damage – forcing Laudrup’s hand in the transfer market with Nathan Dyer also absent until February.

“It’s not good news,” said Laudrup. “He will need an operation. It can be done in the next week and he should be back playing in around a month and a half.

“What has happened in the last couple of weeks has changed things,”
the Dane added.

“We will probably do something now in January and try to add something that we don’t have in certain positions. The numbers are a bit down and that is risky for the last four months of the season.”

Losing a man who has scored 28 goals for the club since arriving from Rayo Vallecano is a huge blow for Swansea, particularly as they have had the Europa League to contend with as well as a number of other injuries – Ashley Williams, Ben Davies, Leon Britton and Michel Vorm all having spent time on the sidelines.

Coach Alan Curtis though is keen to look on the bright side as Michu’s problems could have been a lot more serious.

“We were looking at two to three months,” Curtis said.

“It’s something that needed to happen, because he’s been struggling with his knees and his ankles. It’s interrupted his training and he’s missed a fair chunk of game-time this year. So we’ve missed him.”

Swansea will no doubt look to draft in attacking reinforcements when the transfer window opens next month and may reignite their interest in Iago Aspas, who opted to join Liverpool rather than move to the Liberty Stadium in the summer.

The Spaniard though has failed to establish himself in the first-team picture at Anfield and the possibility of regular action in South Wales might be enough to persuade both the player and Liverpool – even if it were only on a temporary basis.

Swansea currently lie in the relative safety of 11th position in the table but face a tricky run of fixtures with Chelsea, Aston Villa, Manchester City, Manchester United (twice) and Spurs coming up in the next six games.