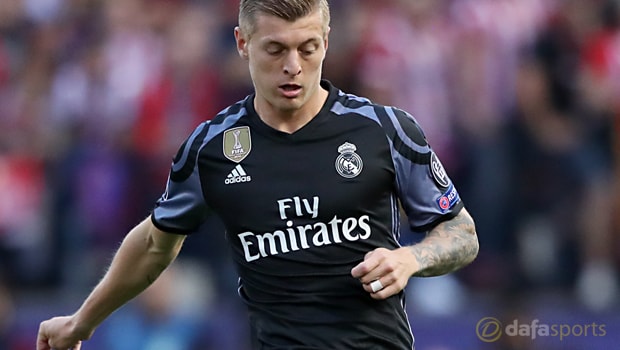 Real Madrid midfielder Toni Kroos insists he has no intention of return to Bayern Munich or the Bundesliga despite recent speculation.

The Germany international came through the academy with Bayern before making his first team debut in 2007 and going on to feature over 130 times.

Kroos helped the club to win the Bundesliga three times, the DFB-Pokal on three occasions and the Champions League in 2012-13.

However, he left the Bavarian giants in the summer of 2014 on a six-year deal for a fee in the region of 30million Euros after a reported dispute over his wage demands.

Carlo Ancelotti, who coached Kroos at Los Blancos for one season during his time in charge between 2013 and 2015, has now been linked with a move for the midfielder having taken over at Bayern last summer.

Despite admitting he enjoyed his time at the Allianz Arena, Kross insists he has no intentions of returning to Bayern or the Bundesliga with his current contract not set to expire until June 2022.

Kroos said: “A return is not an option. I had six wonderful years at Bayern during which we won a lot of silverware.

“Why would you want to rekindle that? “The Bayern chapter is over now – as is the chapter Bundesliga.

“It does not have anything to do with Bayern, but is down to the fact that I have no intention of returning to the Bundesliga.

“There are no other options at the same level as Bayern.”

Real Madrid can be backed at 2.63 to claim a third Champions League title in four years when they take on Juventus, who are priced at 2.88 to pick up the win when the two sides meet in the final on Saturday, while the draw is available at 3.10.